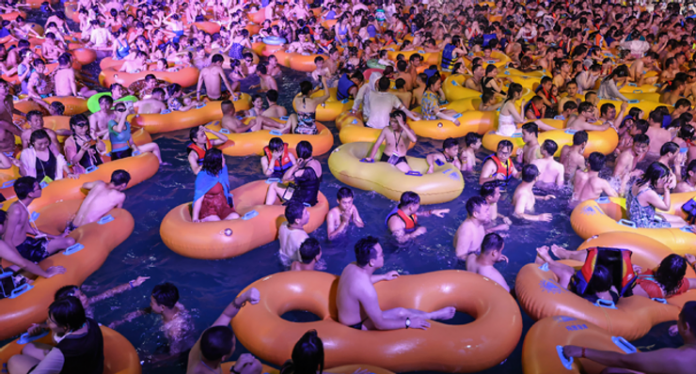 A massive pool party attended by thousands of people at the epicentre of the coronavirus pandemic showed how well China had dealt with disease, authorities insisted Thursday, despite images from the event prompting outrage around the world.

Pictures and video of the weekend electronic music party in Wuhan — where COVID-19 first emerged in December 2019 — have gone viral, attracting a huge negative response in places where lockdowns are still in effect.

The headline “Life’s a beach in Wuhan as world pays virus price” — splashed across the front page of Australia’s Daily Telegraph — was typical of some mainstream news headlines, while comments on social media sites were more colourfully frank.

AFP’s video of the event has been viewed more than 16 million times since it was posted.

One Twitter user called the event “incredibly irresponsible”, while another suggested there was “no way” it would not lead to more cases of coronavirus.

But China said Thursday the pool party showed the city’s “strategic victory” against the outbreak, and said the images were proof the country’s approach to controlling the virus had been successful.

“I saw relevant reports by AFP, and it is said that people in Europe and America were very shocked,” foreign ministry spokesman Zhao Lijian told a press briefing.

This shows that Wuhan has won a strategic victory in its fight against the epidemic,” he said.

China has come under fire from around the world since the outbreak of the virus, which has infected over 22 million people and killed nearly 800,000.

Beijing has denied US accusations that China covered up the initial outbreak and handled it badly.

Zhao called on the media to “report the real situation in China” so people abroad could understand the country’s fight against the epidemic.

Wuhan has not reported any new virus cases in months after undergoing a draconian lockdown and strict restrictions earlier this year.