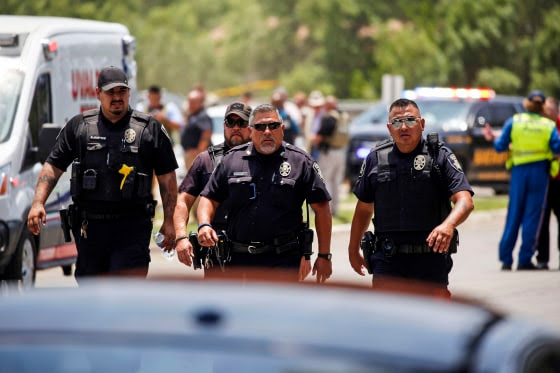 Fourteen students and one teacher were killed in a shooting Tuesday morning at a Texas elementary school, Gov. Greg Abbott said.

The suspected shooter, who might have had a handgun and rifle, was fatally wounded by responding law enforcement, he said.

The incident was no longer active Tuesday afternoon. The suspected shooter was 18, authorities said.

Initial accounts indicated 13 children were taken to the emergency room at Uvalde Memorial Hospital after the shooting at Robb Elementary, according to a Facebook statement and hospital CEO Tom Nordwick. Two were transferred and one is pending a transfer, the CEO said in a phone call.

In addition, two people were pronounced dead prior to arriving at the hospital, Nordwick said. Their names and ages were not released.
University Health said in a tweet that it was treating a child and a 66-year-old woman who is listed in critical condition. The condition of the child is not yet known.

A University Health spokesperson said she could not confirm if the patients are shooting victims, but added their injuries are related to the shooting at the school.

The suspected shooter was taken into custody just after 1 p.m. local time, the Uvalde Police Department announced on Facebook. No other details, including the suspect’s name and the number of those injured, were disclosed.
News of the suspect’s capture came less than an hour after the Uvalde Consolidated Independent School District announced on Twitter that there was “an active shooter” at the elementary school.

“Law enforcement is on site. Your cooperation is needed at this time by not visiting the campus. As soon as more information is gathered it will be shared,” the tweet said.
Source: NBC News