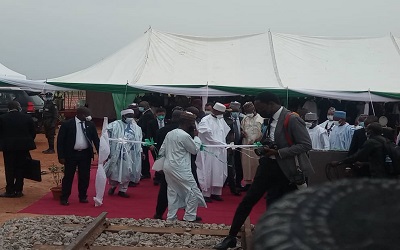 President Muhamadu Buhari says rail transport is one of his administration’s priority. The President said this during the ground breaking ceremony of the Kano -Kaduna rail project.

According to the President, the take off of the project signifies the commitment of his administration to the revival of Nigeria’s railway system to “reduce the deficiency in our transportation infrastructure and drive effective and more efficient transportation of passengers and freight within the country.”
He further said, “this railway connection when completed will establish the ports in Lagos, as the choice for import and export business of the people of landlocked Niger Republic. This would positively drive our economies through employment from new business opportunities and wealth creation.”

On his part, the minister of transport,Rotimi Amaechi in his speech, said the 203 km rail project had already given employment to 20,000 Nigerians.
“The project will no doubt improve the standard of living of citizens within its corridor, create employment and promote trade. In the long term the railway will help decongest the Lagos Port Complex and increase its efficiency as well as further increase the viability of the Inland Dry Ports located in Ibadan, Kaduna and Kano”.
Amaechi shed more light on the scope of the project.

‘The scope of the railway project involves a 203km double track standard gauge railway from Kano to Kaduna. The railway along this route traverses the major cities of Kaduna, Zaria and Kano with three (3) railway stations both for passenger and freight services at Rigachukun, Zaria and Kano with varying capacities and categories’.

“This project will link the Federal Capital, Abuja with the Commercial city of Kano and also link the ongoing Kano – Maradi project. The outstanding addendum, Ibadan – Abuja, will link the Sea Ports in Lagos to Maradi, Niger Republic. This I believe will greatly boost trade between the two countries and foster economic development. This railway line, will present an opportunity for Nigerians to traverse between Abuja and Kano via Kaduna with relative ease’.

Governor of Kano state Abdullahi Ganduje expressed appreciation to the President for granting his state the privilege of the rail project which he said will impact heavily on the people of Mano state.
The event was graced by the Emir of Kano, HRH Aminu Ado Bayero, the Emir of Zazzau and other traditional leaders.Also present were some Ministers and Senators.
The Kano – Kaduna railway project is a part of the third and outstanding segment of the Lagos ~ Kano railway modernization project. The first segment, Abuja – Kaduna Railway line, was flagged-off for commercial operation in July, 2016 and just recently, the second segment, Lagos – Ibadan railway line was commissioned for
commercial operation precisely on June 10 2021.