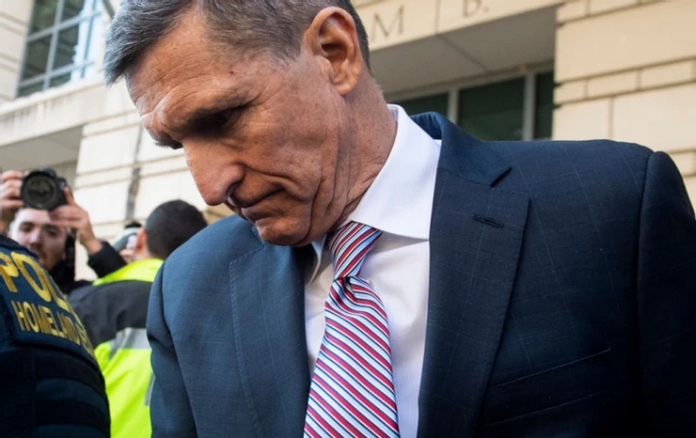 The Justice Department on Thursday recommended a federal judge reverse the conviction of former National Security Adviser Michael Flynn and drop the criminal charges, a stunning reversal in a case that became a powerful symbol of FBI misconduct in the Russia investigation.

The government’s motion must still be granted by U.S. District Judge Emmet Sullivan, and came an hour after the lead prosecutor in the case withdrew.

The government said recent revelations from evidence withheld from the court for years warranted the dramatic recommendation, including that the FBI interview that Flynn was accused of lying during was not warranted by law after agents had already concluded there was no criminal conduct or collusion with Russia by the retired general.

The Government has concluded that the interview of Mr. Flynn was untethered to, and unjustified by, the FBI’s counterintelligence investigation into Mr. Flynn—a no longer justifiably predicated investigation that the FBI had, in the Bureau’s own words, prepared to close because it had yielded an ‘absence of any derogatory information,'” the government said.

“The Government is not persuaded that the January 24, 2017 interview was conducted with a legitimate investigative basis and therefore does not believe Mr. Flynn’s statements were material even if untrue. Moreover, we do not believe that the Government can prove either the relevant false statements or their materiality beyond a reasonable doubt,” it said.

Flynn’s new lawyer Sidney Powell, who aggressively challenged the government’s conduct, hailed the decision. “This is an historic moment for the entire country and crucial to the restoration of the rule of law,” she told Just the News. “I tip my hat to the Attorney General and all the honest prosecutors and agents who fought to find the truth. Sunlight is the best disinfectant.”

The decision to recommend ending the case came just an hour after federal prosecutor Brandon Van Grack, a member of Special Counsel Robert Mueller’s team who led the prosecution of Flynn, resigned from the case without explanation.

Pressure from President Trump and his supporters has built in the past weeks to, not just exonerate Flynn, but have the entire case thrown out of court as the result of newly publicized documents revealing possible misconduct by FBI investigators.

While Flynn had pleaded guilty in 2017 to lying to the FBI he had sought to withdraw his plea after evidence emerged that his lawyers said showed he was “framed” for committing no crime.

Those revelations included that:

FBI agents who investigated Flynn’s contacts with Russian ambassador Sergey Kislyak during the presidential transition in 2016 concluded Jan. 4, 2017, to close the investigation because they found no derogatory evidence of a crime or counterintelligence threat.

The agents were stopped from closing the case by then-Special Agent Peter Strzok, who claimed in text messages that FBI leadership on the 7th floor had intervened.

FBI officials began discussing arranging an interview with Flynn in the absence of any evidence in wrongdoing. A senior FBI official, William Priestap, raised concerns about the strategy, writing in handwritten notes he was worried the FBI was “playing games” and looking to catch Flynn in a lie “so we can prosecute him or get him fired.

Senior DOJ officials had told Mueller’s team that they were concerned by the FBI conduct in investigating Flynn and believed the bureau’s pretext for interview the White House adviser — that he might have violated the Logan Act — was a stretch.

FBI agents discussed how they might avoid or slip in the required warning to Flynn during the interview that lying to the FBI could be prosecuted.

The motion Thursday raised a new concern, specifically citing then-Deputy FBI Director Andrew McCabe’s behavior, suggesting he pressed reluctant FBI officials to proceed with the interview and then-made the call himself to invite Flynn to the interview in hopes he would come solo without any lawyers or White House officials in tow.

The prosecutors cited text messages suggesting McCabe was “frustrated” by Priestap’s concerns and “cut him off.” During the call with Flynn, “McCabe further advised that if Mr. Flynn wished to have anyone else at the meeting, including the White House Counsel, the FBI would have to elevate the issue to DOJ,” the DOJ motion stated.

DOJ’s decision was applauded in many corners, with early reaction suggesting the dismissal was a black eye for Mueller’s investigation and former FBI Director James Comey.

“This is an extraordinary decision but we are living in extraordinary times. It is very rare for such a dismissal to be sought based on its own misconduct.,” George Washington University law professor Jonathan Turley tweeted.

“Flynn was a major target for Mueller. Comey et al sought to create a crime in the absence of any evidence of criminal conduct. The case has now collapsed and represents one of the most ignoble moments for Mueller,” Turley added.