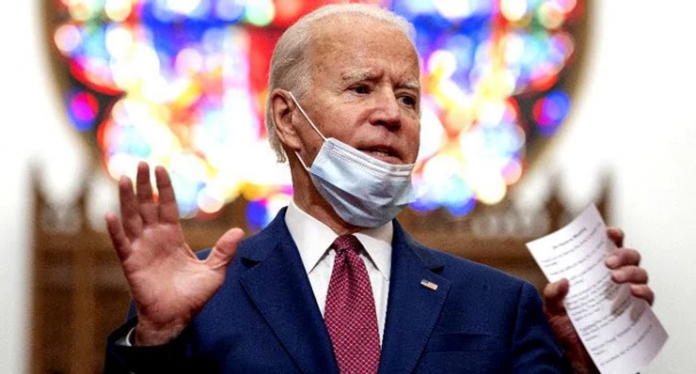 Biden, who had met with anti-racism protesters on Sunday, took to Twitter to express his fury at his opponent’s response to the protests that have broken out nationwide over the death of George Floyd, an unarmed black man, at the hands of a white Minnesota police officer.

“He’s using the American military against the American people,” Biden tweeted after the president vowed to order an army crackdown on civil unrest gripping the United States.

“He tear-gassed peaceful protesters and fired rubber bullets. For a photo,” Biden wrote, referring to Trump’s decision to use law enforcement — including military police — to clear protesters from outside the White House so he could pose for photographs at a riot-damaged church nearby.

“For our children, for the very soul of our country, we must defeat him,” the former vice president said.

Biden also announced in a campaign statement he would speak Tuesday morning in Philadelphia “on the civil unrest facing communities across America.”

The speech will be just his third public appearance since the COVID-19 pandemic began in mid-March.

After facing accusations that he was out of touch by spending too much time at home in virus lockdown, the 77-year-old Biden seems to have gotten another wind and is ready to step up the pace of his campaign as restrictions relax.

In a meeting with African-American religious and political leaders on Monday in which Floyd’s death figured prominently, and speaking later in a virtual town hall, Biden accused Republican Trump of fomenting racist hate and letting minorities suffer most in the novel coronavirus pandemic.

“The band-aid has been ripped off this pandemic and this president,” Biden said, speaking at the Bethel AME Church in his hometown of Wilmington, Delaware.

“Nobody can pretend any longer what this is all about.”

The church meeting was the second time that Biden, who served as President Barack Obama’s vice president, had participated in person in a public gathering since mid-March when the COVID-19 pandemic abruptly paralyzed his campaign.

“Hate just hides; doesn’t go away. And when you have somebody in power who breathes oxygen into the hate under the rocks, it comes out from under the rocks,” Biden said of Trump.

“It matters what the president says,” Biden added. “It encourages people to bring out the vitriol.”

Speaking later at a virtual town hall Biden returned to the theme of racism.

“There is systemic racism, white supremacy, it’s real,” he said. “You see it. I think we all see it but African-Americans see more clearly.”

Floyd’s death “invoked the full weight of our history … how black lives have been devalued by society. And it’s not only intolerable but people are angry.”

Biden’s remarks came after days and nights of demonstrations and riots around the country over the death of Floyd, filmed as he was pleading for air while his neck was under the white police officer’s knee.

Biden said he had spoken with Floyd’s family during the past few days.

During a virtual fundraiser, late Monday Biden said that Floyd’s brother Philonise told him: “Promise me. Promise me we’ll have justice. Promise me people will be held accountable. Promise me that.”

At the Bethel AME church, which has a black congregation, Biden wore a mask and took notes after a prayer was said.

Leaders and congregation members criticised Trump but also challenged Biden to do more for African Americans if he wins the White House in the November 3 election.

“For those who are out there complaining, we’ve got a president that ain’t even showing up, that doesn’t even care,” she said. “Come on.”

But State Senator Darius Brown noted that African-Americans did not gain economically during the eight years of Biden’s vice presidency.

“We’re here not only to love you but to push you” for more support to the Democratic Party’s African-American base, he said.

Biden said he would work in his first hundred days of office to address the needs of black Americans.

Biden also promised that, if elected, he would create a police oversight commission in his first hundred days in office.

Several people urged Biden to choose an African-American as his vice-presidential running mate.

“I promise you there are multiple African-American candidates who are being considered,” he said.

Biden is popular among black voters, a key electorate for any Democrat hoping to win the presidency.

But he is not immune to criticism.

In May, he provoked backlash when he told a radio host “you ain’t black” if he was thinking of voting for Trump. Biden quickly apologized after the interview was aired.