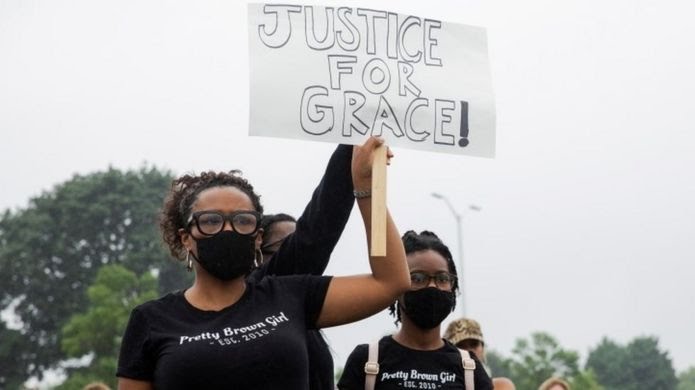 A Michigan judge’s decision to send a 15-year-old girl to juvenile detention for violating her probation by not completing her online schoolwork during the coronavirus lockdown has prompted protests and calls for her release.

The African-American teenager has reportedly been detained since mid-May.

Hundreds of students gathered outside her school and the court to show their support for the girl known as “Grace”.

The state’s supreme court said on Thursday it would review her case.

ProPublica highlighted Grace’s case in a report earlier this week . Following interviews with Grace’s mother, the news site described how the teenager had attention deficit hyperactivity disorder (ADHD) and had already been struggling with behavioural issues.

She had been placed on probation in mid-April via a zoom juvenile court hearing after facing an assault and theft charge last year; one of the terms of the probation was a requirement to do her schoolwork.

ProPublica report that the start of Grace’s probation coincided with the first days of remote schoolwork, and she quickly became overwhelmed without the in-person support of her teachers.

At a mid-May hearing at the Oakland County Family Court Division to decide whether Grace had violated her probation, Judge Mary Ellen Brennan found the girl “guilty on failure to submit to any schoolwork and getting up for school” and called Grace a “threat to the community” because of the previous charges against her, ProPublica reports. Judge Brennan has so far not commented publicly on the ruling.

Fellow students and her teachers at Groves High School, in the Detroit suburb of Beverly Hills, came out in her support at a rally on Thursday, and several thousand people have signed online petitions calling for her release.

A lot of people were behind on their work this semester, no one had motivation to do anything because the teachers weren’t teaching and we were all online. I know so many people that didn’t do their homework,” 18-year-old student Prudence Canter told Reuters news agency.

Social studies teacher Geoff Wickersham told Reuters: “It didn’t seem like the judge or the caseworker knew how grades and due dates and things were structured during the pandemic shutdown in the spring. I think this is a huge injustice.”

“I know if Grace was a 15-year-old white girl she would not be sitting in juvenile detention right now,” a mother, Sheri Crawley, told local TV news station WDIV.

Michigan’s Supreme Court said on Thursday it would review Grace’s case after lawyers for the teenager filed a motion seeking an emergency review.

“The State Court Administrative Office is working with the Oakland Circuit Court to examine the processes in this case,” John Nevin, the court’s communications’ director, said in a statement.