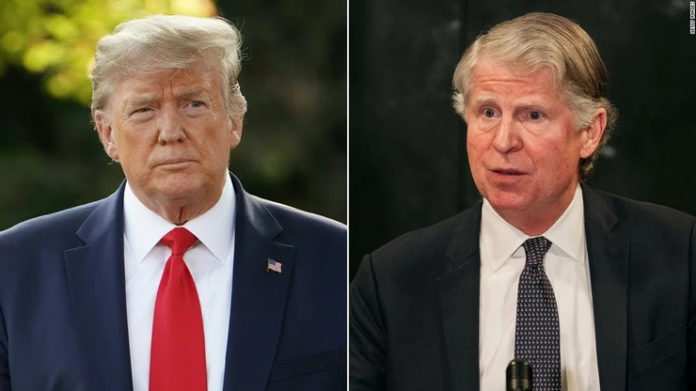 Manhattan prosecutors on Monday asked a federal judge to dismiss President Donald Trump’s lawsuit challenging a subpoena for his financial records, emphasizing that their investigation extends beyond hush-money payments and pointing to public reports of “extensive and protracted criminal conduct” at the Trump Organization.

Manhattan District Attorney Cy Vance’s lawyers have previously said the probe is expansive, and on Monday they pointed out that when the subpoena was issued, “there were public allegations of possible criminal activity at Plaintiff’s New York County-based Trump Organization dating back over a decade.”

Last week, lawyers for Trump filed an amended complaint seeking to block the state grand jury subpoena to Trump’s long-time accountant Mazars USA for eight years of personal and business records by arguing the subpoena was “wildly overbroad” and issued in bad faith.

Trump’s latest legal challenge comes after the US Supreme Court ruled last month that the President does not have broad immunity from a state grand jury subpoena.

In a court filing Monday, lawyers for Vance wrote: “This ‘new’ filing contains nothing new whatsoever, and Plaintiff has utterly failed to make a ‘stronger showing of bad faith than he previously made to this Court.”

The district attorney’s office added that Trump’s lawyers are relying on a false assumption that the investigation is limited to hush-money payments made to two women during the 2016 presidential campaign who alleged affairs with Trump. Trump has denied the affairs.

“Plaintiff’s argument that the Mazars Subpoena is overbroad fails for the additional reason that it rests on the false premise that the grand jury’s investigation is limited to so-called ‘hush-money’ payments made by Michael Cohen on behalf of Plaintiff in 2016,” the district attorney’s office said.

CNN has previously reported that Vance is investigating other transactions that go beyond the hush-money payments.

On Monday, they told the court that given public reports “of these public reports of possibly extensive and protracted criminal conduct at the Trump Organization, there was nothing facially improper (or even particularly unusual) about the Mazars Subpoena, which issued in connection with a complex financial investigation, requesting eight years of records from an accounting firm.”

In 2019, Vance’s office described the scope of its investigation in court filings, but redacted several paragraphs over three pages. That filing openly described the hush money investigation because it was already public. US District Judge Victor Marrero privately viewed the unredacted information and found the subpoena was not overly broad.

Last year, ProPublica revealed discrepancies about the information the Trump Organization told tax authorities and lenders about its business. Vance’s office is looking into those allegations, according to people familiar with the matter.

Cohen, Trump’s former personal attorney, told Congress in 2018 that he believed Trump artificially inflated the value of some of his assets in dealings with insurers and banks. Cohen offered only three internal financial documents as his proof, but no other documents to bolster his claims.

The district attorney’s office interviewed Cohen as part of its Trump investigation at least three times last year, CNN has previously reported. People familiar with the inquiry say Cohen was asked about the range of allegations he has made against the President.