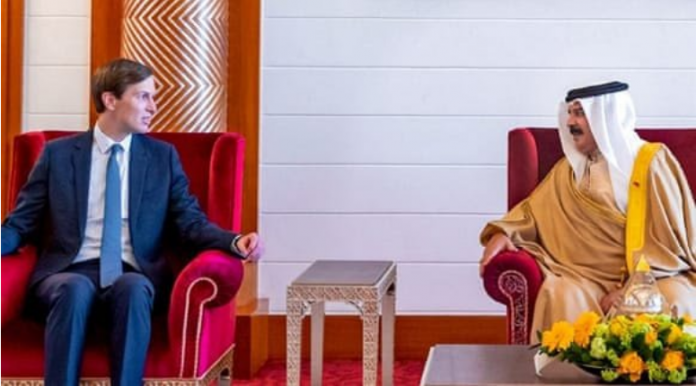 Bahrain has joined the United Arab Emirates in agreeing to normalise relations with Israel, in a US-brokered deal that Palestinian leaders denounced as “another treacherous stab to the Palestinian cause”.

Donald Trump, the president of the United States, announced the deal on Twitter on Friday after he spoke by phone to Bahrain’s King Hamad bin Isa Al Khalifa and Israeli Prime Minister Benjamin Netanyahu.

“This is truly a historic day,” Trump told reporters in the Oval Office, saying he believed other countries would follow suit.

“It’s unthinkable that this could happen and so fast.”

In a joint statement, the United States, Bahrain and Israel said “opening direct dialogue and ties between these two dynamic societies and advanced economies will continue the positive transformation of the Middle East and increase stability, security, and prosperity in the region”.

A month ago, the UAE agreed to normalise ties with Israel under a US-brokered deal scheduled to be signed at a White House ceremony on Tuesday hosted by Trump, who is seeking re-election on November 3.

The ceremony is due to be attended by Netanyahu and Emirati Foreign Minister Sheikh Abdullah bin Zayed Al Nahyan. The joint statement said Bahrain’s Foreign Minister Abdullatif al-Zayani will join that ceremony and sign an “historic Declaration of Peace” with Netanyahu.

Like the UAE agreement, Friday’s Bahrain-Israel deal will normalise diplomatic, commercial, security and other relations between the two countries. Bahrain, along with Saudi Arabia, had already dropped a ban on Israeli flights using its airspace.

Friday’s joint statement only made passing mention of the Palestinians, who fear the moves by Bahrain and the UAE will weaken a longstanding pan-Arab position that calls for Israeli withdrawal from already illegally occupied territory and acceptance of Palestinian statehood in return for normal relations with Arab countries.

The statement said Bahrain, Israel and the US will continue efforts “to achieve a just, comprehensive, and enduring resolution to the Israeli-Palestinian conflict to enable the Palestinian people to realise their full potential”.

“It took us 26 years between the second peace agreement with an Arab country and the third, but only 29 days between the third and the fourth, and there will be more,” he said, referring to the 1994 peace treaty with Jordan and the more recent agreements.

For its part, Bahrain said it supports a “fair and comprehensive” peace in the Middle East, according to BNA state news agency. That peace should be based on a two-state solution to resolve the Israeli-Palestinian conflict, the report said, quoting King Hamad.

Jared Kushner, Trump’s son-in-law and senior White House adviser, hailed the agreements as “the culmination of four years of great work” by the Trump administration.

Speaking to reporters in a call from the White House soon after Friday’s announcement, Kushner said the UAE and Bahrain agreements “will help reduce tension in the Muslim world and allow people to separate the Palestinian issue from their own national interests and from their foreign policy, which should be focused on their domestic priorities”.

In a statement, the Palestinian Authority said it “rejects this step taken by the Kingdom of Bahrain and calls on it to immediately retreat from it due to the great harm it causes to the inalienable national rights of the Palestinian people and joint Arab action”.

“It is a purely Saudi decision. In the absence of the ability, due to internal constraints, by the leadership in Saudi Arabia to respond positively to Trump, they gave him Bahrain on a silver platter.”

Bahrain, a small island state, is home to the US Navy’s regional headquarters. Saudi Arabia in 2011 sent troops to Bahrain to help quell an uprising and, alongside Kuwait and the UAE, in 2018 offered Bahrain a $10bn economic bailout.

Al Jazeera’s Nida Ibrahim, reporting from Ramallah in the occupied West Bank, agreed, saying Palestinian officials believe the Bahrain and the UAE deals would not have happened “without regional backing”.

“The fear among the Palestinians is that these deals are a green light for more Arab states to normalise with Israel,” she said. “And many Palestinians say that for years they saw the US as Israel’s lawyer or partner and now they see it as Israel’s agent. That’s because Trump is the one announcing these normalisation deals.”