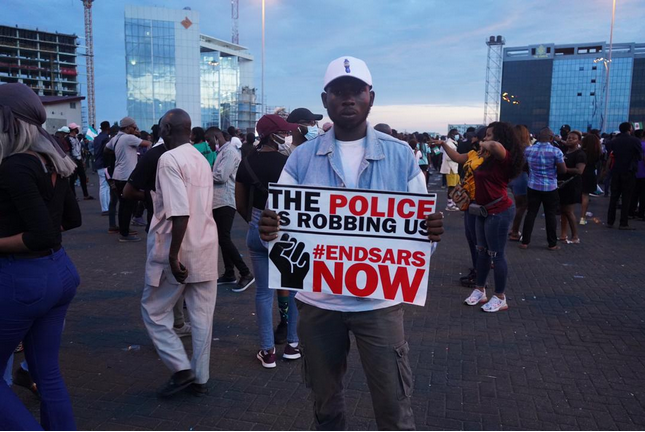 Young Nigerian Rap Artiste ,Egbon Cass has lamented the killings of End SARS Protesters at the Lekki toll gate in Lagos. The graduate of public administration born Erik Ogar who expressed his views in a video says the youths were only exercising their fundamental human right to self expression and did not deserve the treatment meted out to them.

” The protests became necessary when we realized that SARS had taken more Nigerian youth than the corona pandemic had, literally almost every youth in Nigeria has had a traumatic experience with the special anti robbery squad. I’m not excluded. As a matter of fact I daresay every youth in Lagos state has had a traumatic run in with SARS. When a policeman points a gun at you and tells you that he will shoot you and nothing will happen it is time to protest. When the government “disbands” the unit severally but they only come back stronger and more trigger happy it is time to protest. Just take some time and go and listen to the stories the youth have to tell ; people have lost their children,their brothers, their fathers!!! For using a particular model of cell phones and dressing a certain type of way?? For being able to afford cars?? Granted they are are some youths involved in nefarious criminal activities to get the things they have but there has to be another way to deal with that problem that doesn’t involve profiling, shooting and kidnapping innocent citizens of the country you swore to serve and protect. It was necessary to protest a long time ago, we waited too long, but better late than never.

When asked about the destruction that followed the protests in some areas and of the protesters at some point had not being sidetracked by nefarious elements who hijacked the protest, Cass said the majority of protesters had a unified purpose which was a better Nigeria.

“The original objective of the end SARS protests was as simple as the hashtag;

End the unit, don’t disband it , reform the entire police force because even though the spotlight is on SARS right now , some other police officers are as power drunk and trigger happy as the SARS officers, so physiological evaluation and proper pay for police officers

Justice for all the victims of police brutality and adequate compensation of their families.

Investigate and prosecute all the killer police officers.

And release all innocent arrested protesters”.

On why the protests had continued even after the IGP announced the disbandment of the unit, he said the youths were not convinced.

“The government didn’t realize that it wasn’t dealing with a generation it could pacify with false promises so instead of addressing the issues and implementing them they dig into their bag of see -through tricks and start worsening the problems.

All the events that followed the protests showed the youths that we cannot be hoping to reason rationally with a government that claims snake and monkeys stole public funds.

End SARS became reform Nigeria and all elements of SARS.

If the government had showed us actual implementation of any of the points on the 5 for 5 demands we would have been more open minded”.

Egbon Cass pointed at some wrong signals that were sent out by the powers that be.

“From the thugs they sent in buses to attack protesters to the Lekki massacre which the media and the army is doing its best to downplay, what we want now is a new Nigeria.

Not one in which the army can deny being present at a massacre when there is video evidence and the governor of a state will lie and say “No fatalities” and the President will be silent and the Vice President will wait until over 24 hours later to offer a very uninteresting response to the incident.

We want CHANGE and not the kind this government promised us.

He described Governments approach to the protests as “SAD”.

The Government showed it’s citizens that their lives matter less than the positions of power they occupy and that they only need us during elections”.

He called on the youths not to give up but to ensure that they do not become violence despite the circumstances.

“On behalf of the youth I’d like to thank them for the eye opener and assure them that their message has been well received.

Since it’s easier to do all that has happened than implement policies that favor the citizens , we sympathize with them and we pray that God grants them the strength to bear the loss of their citizens respect, trust and confidence”.

Egbon Cass emphasized the need for the protests to be peaceful.

“This is my message to the Nigerian Youth, SORO SOKE !!! For the sake of all the people who have lost their lives in this fight SORO SOKE!!! If our parents had fought for us we wouldn’t need to fight like this !!! SORO SOKE!!! Stay peaceful but loud. Protect yourselves and don’t take any unnecessary risks, you can’t enjoy the new Nigeria we are fighting for from the great beyond, but pleas and please SORO SOKE !!! Aluta continua”