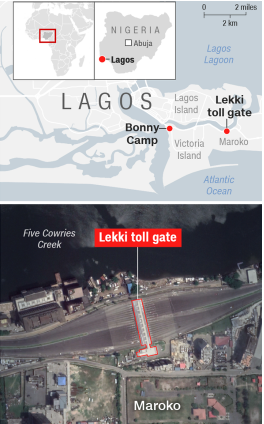 A senior Nigerian minister lashed out against CNN Thursday, saying the network should be sanctioned over its investigation, which uncovered evidence that the Nigerian army and police opened fire on unarmed protestors on October 20.

CNN’s investigation focused on a demonstration against police brutality, led by the largely peaceful “#EndSARS” movement.

“Like everyone else, I watched the CNN report. I must tell you that it reinforces the disinformation that is going around, and it is blatantly irresponsible and a poor piece of journalistic work by a reputable international news organization,” he told reporters at a press conference in Abuja, in the most significant federal government response so far to the October 20 violence.

“This is very serious and CNN should be sanctioned for that,” he said.

CNN stands by its investigation, a company spokesperson said.

“Our reporting was carefully and meticulously researched, and we stand by it,” the spokesperson said via email.

The report was based on testimony from dozens of witnesses, and photos and video obtained and geolocated by CNN. It painted a picture of how members of the Nigerian army and the police shot at the crowd, killing at least one person and wounding dozens more.

Protesters Victor Sunday Ibanga, left, and Wisdom Okon. Their families say they haven&#39;t seen them since the protest on October 20.

Protesters Victor Sunday Ibanga, left, and Wisdom Okon. Their families say they haven’t seen them since the protest on October 20.

CNN verified photos and videos acquired from multiple eyewitnesses and protesters using timestamps and other data from the video files. Video footage shows soldiers who appear to be shooting in the direction of protesters. And accounts from eyewitnesses established that after the army withdrew, a second round of shooting happened later in the evening.

Prior to publishing the report, CNN tried multiple times to elicit comment from the Nigerian army and police. A Lagos State police spokesman declined to comment because of an ongoing investigation. While a statement from the Lagos State government said that there would be no comment while a judicial tribunal was underway.

CNN also included comments from army representative Brigadier Ahmed Taiwo, testifying before the tribunal. He denied that soldiers would shoot at Nigerian citizens.

The investigation was broadcast and published on Wednesday and cast doubt on Nigerian authorities’ shifting and changing statements over what happened at the protest at the Lekki toll gate in Lagos.

Addressing reporters, Mohammed insisted that “the military did not shoot at the protesters at the toll gate” but fired blank ammunitions into the air, blaming looters for the violence which broke out on the night of October 20.

“Six soldiers and 37 policemen were killed all over the country during the crisis,” Mohammed said.

“CNN relied heavily on unreliable and possibly doctored videos as well as information sources from questionable sources to reach these conclusions,” he continued.

He did not provide any evidence the videos were doctored.

The CNN report included evidence that bullet casings from the scene matched those used by the Nigerian army when shooting live rounds, according to current and former Nigerian military officials.

Two ballistics experts also confirmed with CNN that the shape of the bullet casings indicate they used live rounds, which contradicts the army’s claim they fired blanks.

While the Minister for Information and Culture asserted that “not a single family” has reported the death of relatives during the protest on October 20, the Chief Coroner of Lagos State has since issued a public call for all those who have “lost loved ones between 19 — 27 October 2020” to come forward and provide evidence which could assist in the “identification exercise.”

During his press briefing on Thursday, the Minister denied reports of fatalities at the protest.

“As I said earlier, what started as a peaceful protest against police brutality quickly degenerated into incredible violence despite an immediate response to the demands by the government,” he said.

“While we await the Judicial Panel in Lagos to unravel what transpired at the Lekki toll gate, what we can say, based on testimonies available in the public space, is that the world may have just witnessed, for the very first time ever, a massacre without bodies,” he added.

According to Mohammed, the National Economic Council (NEC) directed the “immediate establishment” of a state-based judicial panel of inquiry on October 15 — before the Lekki toll gate incident, but after protests against violence had begun — to investigate complaints of police brutality and extrajudicial killings.

Eyewitnesses have since told CNN that the government’s comments are “lies,” making them feel as though they had “hallucinated the whole event.”

“Haven’t they hurt us enough? I still close my eyes and see the blood and hear the screams,” another eyewitness said.

During the press conference, Mohammed said the federal government continues to be “very satisfied” with the role played by security agencies — especially the military and police — through the protests.