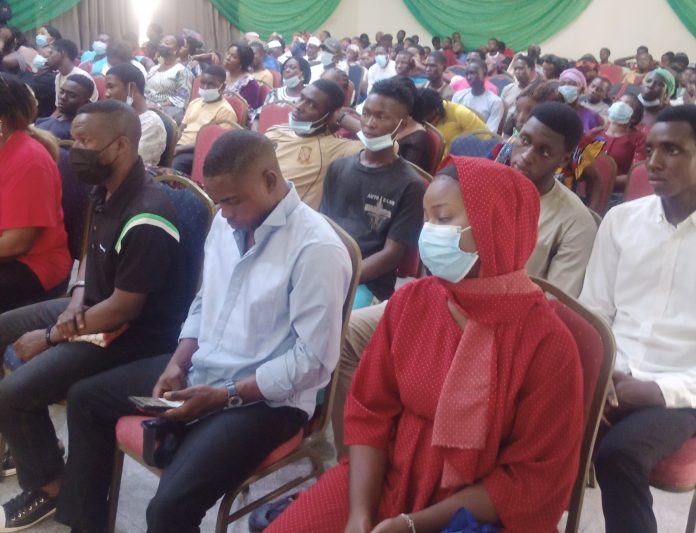 Abuja (Nigeria) – Peionews witnessed that no fewer than 200 Non-Governmental Organizations (NGOs), on Wednesday, converge in Abuja, the nation’s capital, to drum support for the Bill for an Act to establish the National Youth Service Corps (NYSC) Trust Fund.

The Bill, which was subject to public hearing by the House of Representatives Committee on Youth and Sports, on Thursday, 24th February, 2022; is being sponsored by Rep. Mayowa Akinfolarin (APC, Ondo).

During the public hearing at the National Assembly, the Bill received a total of 450 memoranda, with the whole memos submitted and presented in support of the establishment of NYSC Trust Fund.

At a public symposium organized by Nigeria First, in Abuja on Wednesday, leadership of various NGOs across the country, appraised the submissions, presentations, debates and the consensus that was reached at the public hearing on the Bill.

The symposium was also used to commend Members of the House of Representatives, the NYSC and other stakeholders for the overwhelming support during the public and the progress made so far by the Lawmakers.

Participants also called on President Muhammad Buhari, to consider speedy assent to the Bill when passed, while urging the lawmakers to give their overwhelming votes during the third reading and final passage.

The NGOs also reiterated confidence in the track record of the NYSC over the years to effectively manage the Trust Fund without political interference.

Giving his keynote address, A University Don, Dr Okpe Okpe, said the urgent assent to the Bill would serve as a panacea for insecurity and national disintegration, adding that it will assist in curbing incessant cases of ritualism in the country.

Okpe said the fund when in place will address financial constraints in training, orientation camp development, provision of sundry welfare and also mitigate the problem of employment in the country through the provision of capital to the corps members to establish their businesses.

“Let me sieze this opportunity to commend the current director-general of the NYSC Maj. Gen. Shuaibu Ibrahim for initiating the idea of the Trust Fund, the fund will provide a sustainable source of funds for the NYSC, skill acquisition training and provision of start-up capital to corps members, train and retrain the personnel of the NYSC, develop camps and the NYSC formations and provide facilities therein.

“NYSC Trust Fund when passed into law will also improve the general welfare of not only corps members but the general youth and unemployed Nigerians by extension, which will help in promoting national unity, integration, self-reliance and accelerated development of the national economy”, Okpe said.

Nigeria First Convener, Richard Augustine, in his welcome address, said the nation needs to build an economic model where business ideas will not be killed but nurtured into business empires; where men and women of skills shall realise their dreams and potentials.

He stressed that the youth have to be encouraged to strive collectively to end poverty, hunger and deprivation in the land using instruments such as the planned Youth Fund.

“NYSC Trust Fund, on its final stage of becoming an Act, it is actually meant to address inclusive growth in Nigeria and this fact was well canvassed during the public hearing on the Bill held on Thursday, February 24, 2022”, he added.