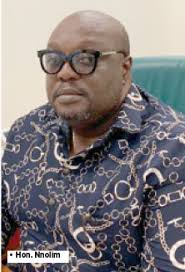 Abuja – The establishment of a Federal University of Agriculture Ugbawka, in Nkanu East Local Government of Enugu State will help boost agricultural production in the Southeast and the nation at large.

Honourable Nnaji who represents Nkanu East/West Federal Constituency of Enugu State in the Federal House of Representatives in his opening remarks as the sponsor of the Bill stressed that Ugbawka as one of the food baskets of the Southeast region needed the institution to boast agricultural production capacity in the zone.

According to him, “in the whole Southeast, you have two main popular brands of rice, Abakaliki rice and Ugbawka rice. Ugbawka rice is often referred to as Uncle Ben’s rice because of its quality “.

He noted that the university when established would improve knowledge and technology in agricultural production for the people of southeast and the nation in general.

Honourable Nnaji thanked the committee and the leadership of the House of Representatives for all their supports to the Bill and assured that the community and Nkanu East Local Government as well as the State Government were all in support of the Bill.

The two prominent leaders and representatives of the community, Chief Rex Onyeabor and Comrade Fidelis Edeh who made presentations on behalf of Ugbawka people praised Honourable Nnaji for sponsoring the Bill assuring the committee on Agric Colleges and Institutions as well as the House of Representatives that the entire community and the local government were enthusiastic about the proposed university.

They both agreed that agriculture has gone beyond subsistent to knowledge and scientific base in order to boost production adding that the advantages of the institution to the Southeast region and the nation could not be overemphasized.

Comrade Edeh also presented a document signed by the leaders of the community to prove the community’s willingness to host the institution and provide all the supports needed for its take off when the Bill is eventually signed into law.