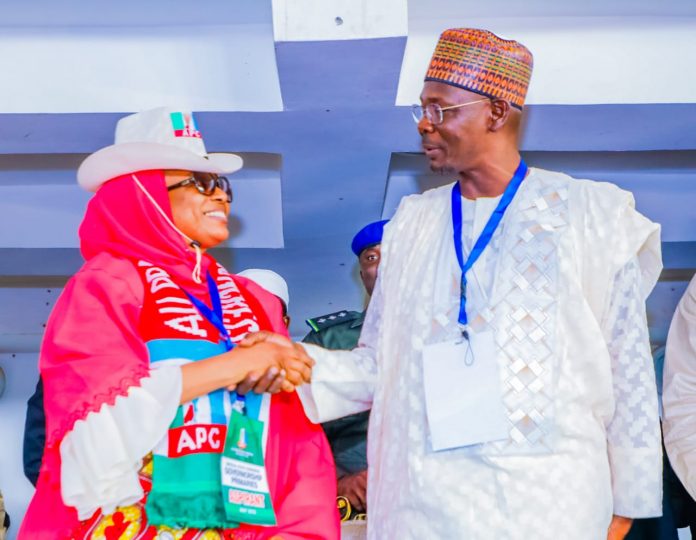 In a victory speech shortly after he was declared winner at the Lafia City Hall, Thursday, the Governor thanked God for the peaceful nature of the exercise.

He expressed satisfaction that Nasarawa State has once again demonstrated the ability to carry out such exercise peacefully, hopping that the forthcoming general election will also be conducted peacefully throughout the state.

Engineer Sule thanked the delegates for not only taking part in the exercise but for their patience.

He particularly thanked his rival, Dr. Fatima Abdullahi, for her performance during the primary election, especially against the rumour that she was stepping down from the contest.

Engineer Sule commended her for making a move that will serve as encouragement especially for women in the North, to seek to occupy elective positions.

“My happiness is that you have gone through the exercise and have gained the experience. And now I have no doubt in my mind that should you come out in 2027, the performance will be different,” he said.

The Governor equally thanked the chairman of the election committee, Ambassador Ahmed Isa Ibeto and members of his team, for the smooth conduct of the governorship primary election.

A visibly excited Engineer Sule, thanked the people of Nasarawa State, promising to continue with the laudable development initiatives of his administration.

“My number satisfaction is that Nasarawa State has again proved that we can carry out any exercise in peace. And I am hoping that the general election will also be conducted peacefully,” he stated.

Earlier, Dr Fatima Abdullahi, ex-wife of the National Chairman of the APC, Senator Abdullahi Adamu, congratulated Engineer Sule on his resounding victory at the polls.

Dr. Abdullahi acknowledged that, through the exercise, the people of the state, have decided that the incumbent should continue with the good work that he started.

She explained that she joined the race as a face of hope for the youth and women, especially the Northern Nigerian woman whose participation in politics has been poor and whose involvement in governance has been low, despite being the highest voters especially in Nasarawa State.

Dr Abdullahi declared her support together with that of her teeming supporters, towards the victory of the Governor during the general election.

With this development, Engineer Sule has cleared the path for a second term in office, ahead of the coming general election, where he will recontest against Hon David Ombugadu of the opposition Peoples Democratic Party (PDP).