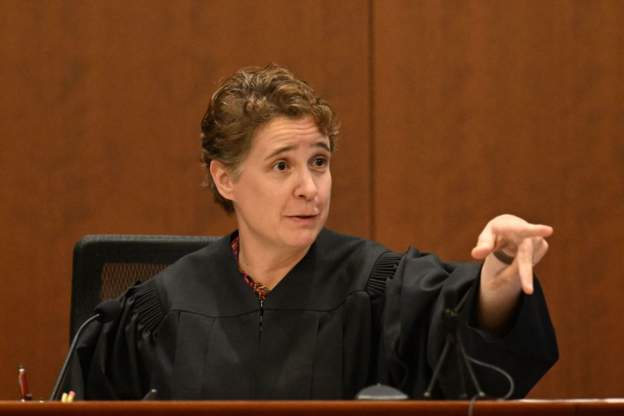 When jurors delivered their verdict, Johnny Depp was awarded $10m (£8m) in compensatory damages and $5m (£4m) in punitive damages.

But punitive damages in the state of Virginia are capped at $350,000.

US media reports that Judge Penny Azcarate has now reduced the size of Depp’s punitive damages award to meet that legal limit.

Depp will therefore receive about $10.4m in total,

Amber Heard – who won one of her three counter-claims against Depp – was awarded $2m in compensatory damages but received no money for punitive damages.

Amber Heard supporter Sydni Porter, carrying a flag with messages from other fans, says she is “disappointed and confused” by the verdict:

“It doesn’t make sense. Johnny Depp had already been on the downfall with his career, so I don’t think she had anything to do with it.

It’s disappointing for women going forward and how they have to bring evidence to court. Especially against someone as high profile as Johnny Depp.

The #MeToo movement seems to have separated themselves from [the trial] so I don’t think it’ll be affected.

It was very hard to watch even if I believed Johnny was the one who was abused. It shouldn’t be a spectacle for us all to watch.”
Johnny Depp fan Diana Merlo, 24, followed live coverage of the case on her phone and via TikTok:

“I’m happy for Johnny. He won his case, he was always being truthful and Amber Heard wasn’t.

I was nervous. When it comes to domestic abuse, we always hear about women not men.

Women can be just as abusive. Feminism is standing with people, not just women.”
Source: BBC