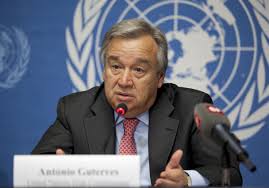 UN Secretary General, Antonio Guterres, has condemned the heinous attack on worshippers at a Catholic Church in Nigeria, at Owo, Ondo State, urging the Nigerian Government to fish out the perpetrators.

Guterres, in a statement by his spokesman, Stéphane Dujarric, on Monday, urged the Nigerian authorities to spare no effort in bringing the perpetrators to justice.

According to him, the secretary-general condemns in the strongest terms the heinous attack in St. Francis Catholic Church in Owo, Ondo State.

The attack, which happened on Sunday, resulted in the death and injuries of scores of civilians as people gathered for the Pentecost mass in the parish.

The spokesman said the secretary-general emphasised that attacks on places of worship are abhorrent.

Guterres extends his heartfelt condolences to the families of the victims and wishes a speedy recovery to the injured.

He also expresses his sympathies to, and solidarity with, the Government and people of Nigeria.

He told journalists in New York that the UN Resident Coordinator in the country, Matthias Schmale, strongly condemned the attack.

“I can tell you that the Resident Coordinator for Nigeria said that the UN in Nigeria strongly condemns the brutal attack on worshippers at St Francis Catholic Church.

“The team sends its deepest condolences to families and friends mourning the victims of this horrific crime,’’ he said.

According to him, Schmale appealled for calm, saying perpetrators should be brought to justice.