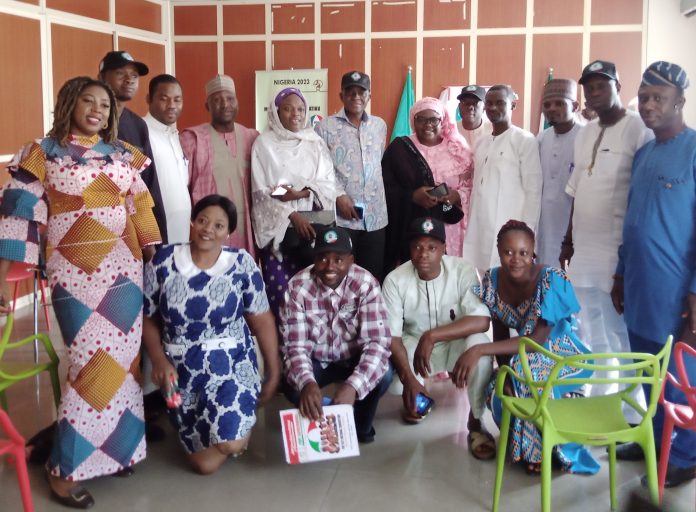 Group under the auspices of ‘Partnership for Atiku 2023’ on Sunday unveiled it’s logo at the headquarters of Atiku campaign office in Abuja, Ahead of the 2023 presidential election in Nigeria,

The National Coordinator, Prince Moses Adebisi said that the group, with membership across the country, is committed to the Atiku project now more that ever before. Adding that the group was birthed to counter the errornous believe by some persons who feel they have the power to control the media in the South West.

According to him, Atiku project is a must for a person like him because he has been on it 2003 and in 2004 he got a response from his principal (Alhaji Atiku Abubakar).

Adebisi who said that they have to redouble their efforts, recalled that there was a slogan by Tinubu which he always maintain and say to people that after Atiku it’s his turn. He therefore called on the presidential candidate of the All Progressives Congress to wait until his principal- Atiku takes its turn first.

Earlier in his remarks, General Secretary of Atiku campaign Organisation, Mr Jide who gave reasons why Nigerians, especially youths should rally round Atiku Abubakar, said he is a unifier, a detribalised man, father to all and he is not a religious bigot, he’s a man who loves everyone and doesn’t not bellitle anybody.

The former Director of Engineering for Aviation, reminded that the problem we are faced with today as a country is that we are disunited, stressing that the only person that can unify us today is Atiku Abubakar. He said this is so because there’s no major tribe that is not inside his house, and as such he cannot come and say I want to discriminate against the West, North, East and South South.

He also identified insecurity as another major challenge facing the nation today and that Atiku is the only person that can secure our borders from smugglers, particularly, give that he rose to number two in customs and everywhere he worked, he delivered convincingly.

He therefore assured the group that there is no support given to Atiku that will be regretted. Jide charged the group to mobilised the youths to work for him as this is the last chance for Nigeria.

In her remarks, the Chairperson and Chief unveiler of the logo , Hajia Miriam Atiku Abubakar commended the members of the group for their consistent and determination to the Atiku project nationwide.

She said the issue here is about our future and about ourselves. Reiterating that this is really a time to deliver, a time for the country to understand who Atiku is and his plans for the country.

Hajia Miriam also offered to extend whatever support the group needs from her.lecalls that leaders of the group from across the the three geopolitical zones graced the unveiling.