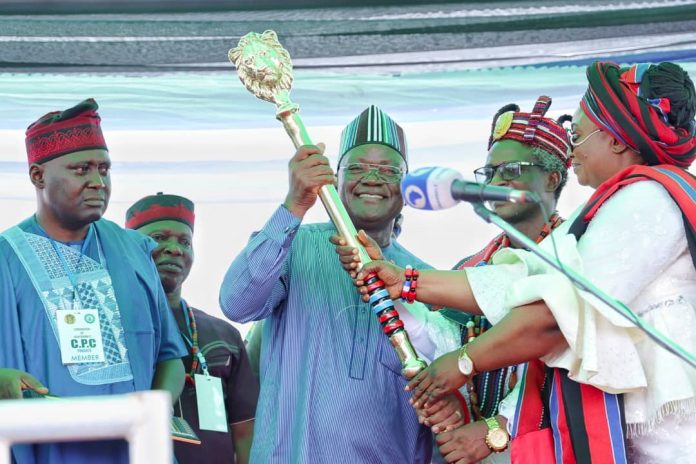 Benue State Governor, Samuel Ortom has restated the commitment of his administration to prioritizing the welfare of traditional rulers in the State.

The Governor acknowledged that the traditional institution has made tremendous progress in the State, noting that the welfare of traditional rulers has been given top priority since the inception of his administration and pledged to sustain the tempo.

This was contained in a statement signed by the Chief Press Secretary, Nathaniel Ikyur made available to Peionews on Thursday.

According to the statement, Governor Ortom expressed optimism that a befitting palace, which is at 90 percent completion, would soon be completed and commissioned for the comfort of the Idoma paramount ruler.

While congratulating the new Och’Idoma, Governor Ortom described as divine the ascendancy of the King to the throne and prayed for his reign to be peaceful, urging the subjects to support the new king to succeed.

Making a remark shortly after being presented with a staff of office and certificate of coronation, His Royal Majesty, John Elaigwu Odogbo accepted to serve the Idoma kingdom as its paramount ruler, pointing out that fairness, equity, justice will be his guiding principles in ruling his subjects.

The new Och’Idoma declared that peace will return to Idomaland under his reign, adding that the Idoma kingdom has been handed over to God as a mark of a new dawn.

Tor Tiv the 5th and Chairman, Benue State Traditional Council, His Royal Majesty, Professor James Iorzua Ayatse in a goodwill message, assured the new Och’Idoma of support and prayed to God to grant him good health to lead the Idoma nation to the promised land.

Earlier, the Special Adviser to the Governor on Local Government and Chieftaincy Affairs, Barrister Kenneth Achabo had presented the new paramount ruler for coronation and installation.