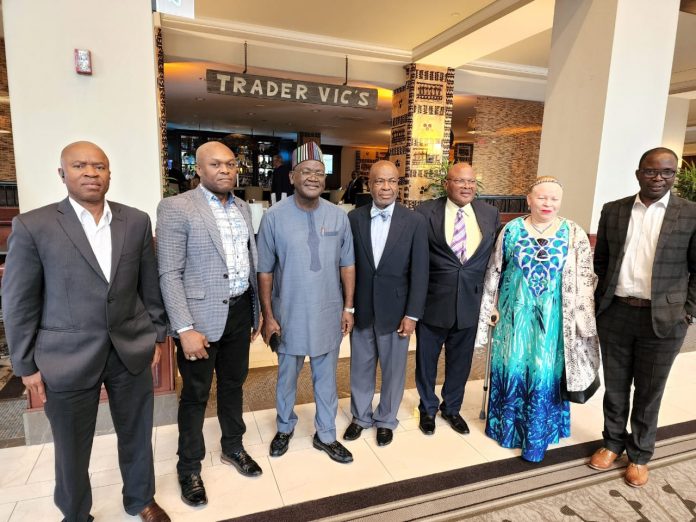 Benue State Governor, Samuel Ortom has called for the release of the detained leader of the Indigenous People of Biafra, IPOB, Nnamdi Kanu, for the peace process in the country to be taken seriously.

The Senior Special Assistant to Governor Ortom on Diaspora Affairs, Peters Ichull disclosed this in a statement made available to newsmen in Abuja.

According to the statement, Governor Ortom made the call when a group under the aegis of American Veterans of Igbo origin paid him a courtesy visit in Washington DC, USA on July 13th 2022.

He stated that Nnamdi Kanu’s issue is a social-political challenge that must be dealt with politically. He argued even members of Boko Haram who pose a greater threat to the country’s unity have often been freed, resettled and some integrated into the armed forces.

Governor Ortom South East of Nigeria must be given a sense of belonging to erase the impression of persecution of a section of the country.

He tasked Igbo veterans in the United States of America to believe in one Nigeria, pointing out that no country on earth is without its challenges.

The Benue State Governor told the group that power shift to the South East is possible, if the people of the region put their differences aside to pursue the objective in unity.

Ortom said his call for freedom of worship was not only to protect the rights of Christians, but so that all Nigerians will be free to practice their faith without intimidation or molestation in any part of the country.

He thanked the group for appreciating his modest contributions to national discourses but challenged South-Eastern Nigerians living abroad that charity begins at home, saying “there is nowhere better than home but only peace and security can guarantee the success of your investments back home”. The governor therefore called on the veterans to support peace efforts in the Sout East region so that both their communities and investments will experience sustainable growth and prosperity.

The group was led by its President, Dr Sylvester Onyia, his vice, Dr Prince Joe Nduka. Other members of the delegation included Dr Ofo, the group’s PRO and Nigeria’s former ambassador to South Africa, Dr Mrs Ajulu. Dr Onyia was full of praise for Ortom’s fearless confrontation of Nigeria’s ills, insisting that only such a stand from leaders could build bridges of understanding and give hope to despairing Nigerians abroad that one Nigeria is possible.

The group however expressed fears for the upcoming general election owing to the spate of insecurity in the country and called on Governor Ortom not to relent on pursuing the best security options.

They assured the Governor of its support in amplifying his voice in peace-building to their representatives in the American Congress “You are not alone; we are with you. Continue speaking the truth; truth is the manifestation of God”, said Dr Onyia, the group’s president.