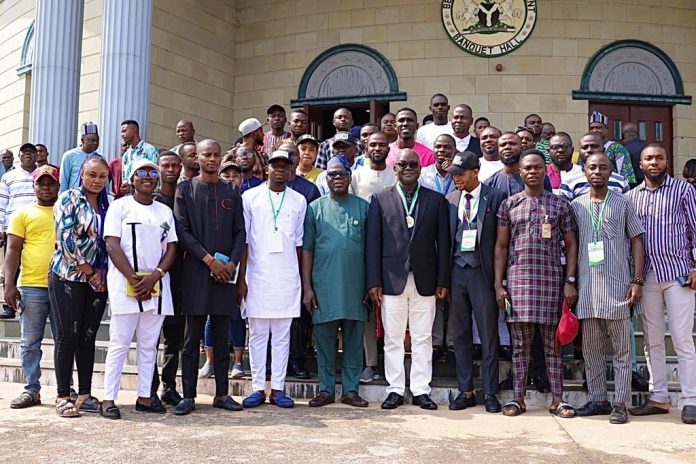 Benue State Governor, Samuel Ortom has charged Benue youths to utilize social media as a platform to evolve solutions to problems rather than using it to destroy personalities and institutions.

Governor Ortom gave the charge Wednesday, August 17th, 2022 when he interacted with the National Union of Benue State Students, NUBESS and Benue State Youth Parliament who jointly paid him a courtesy call at the Benue Peoples House, Makurdi.

The Governor told the youth groups that social media is a veritable platform in the 21st century, emphasising that “We can advance it to positively contribute in bringing solutions to some of the challenges confronting the society.”

According to the state statement signed by his Chief Press Secretary, Nathaniel Ikyur made available to Peionews, Governor Ortom also challenged the Benue State Youth Parliament to evolve creative ideas to contribute to governance in the state.

“As you brainstorm in your parliament sessions, bring forth any creative ideas and channel them through the Commissioner for Youths and Sports Development so add value to our governance,” he stated.

The Governor eulogized the resilience, mature and orderly conduct of Benue youths even in the face of challenges they were passing through, pointing out that he was impressed with the manner youths in the state conducted themselves, particularly during the #EndSARS protest across the country.

He stated that it was the culmination of the protest with no single incident of destruction recorded in the State that his administration convened the Benue Youth Summit, stressing that the resolutions from the summit were being implemented to support youth agitations and development in general.

On NUBESS’ appeal to the Governor to intervene in the prolonged national strike embarked upon by the Academic Staff Union of Universities, ASUU, Ortom acknowledged that the industrial impasse had become a national embarrassment.

The Governor stated that he plans to soon interface with the Benue State University branch of ASUU on how they could discontinue the sympathy strike to enable students to return to school.

Governor Ortom said he was impressed with the student’s idea to convene the Students Entrepreneurship Summit, stressing that it was a welcome initiative that would positively engage the students.

He encouraged the youths to lead exemplary lives, stressing that they must be of good conduct and shun crime and social vices, which he noted could be inimical to their progress in life.

Earlier, the President, National Union of Benue State Students, NUBESS, Comr. Gaius Injorovkaa and the Speaker, Benue State Youth Parliament, Ms. Rachael Tyona had in their separate speeches passed a vote of confidence on the leadership of Governor Samuel Ortom for his youth development and security initiatives in governing the state.

The NUBESS President particularly acknowledged Governor Ortom’s education-friendly policies, citing the attention the administration has given to the Benue State University, payment of students’ bursary allowances as well as revamping of primary and secondary schools in the State.

Also speaking, the State Youth Parliament Speaker, Ms. Tyona affirmed the premium Governor Ortom has placed on youth development initiatives in the state, stating that it was the reason the parliament deliberated and passed a vote of confidence on the Governor for his youth-friendly initiatives.

The two groups jointly pledged to stand by Governor Ortom in his unrelenting efforts at ensuring the security of lives and property, urging the Governor not to succumb to intimidation and even threats on his life.