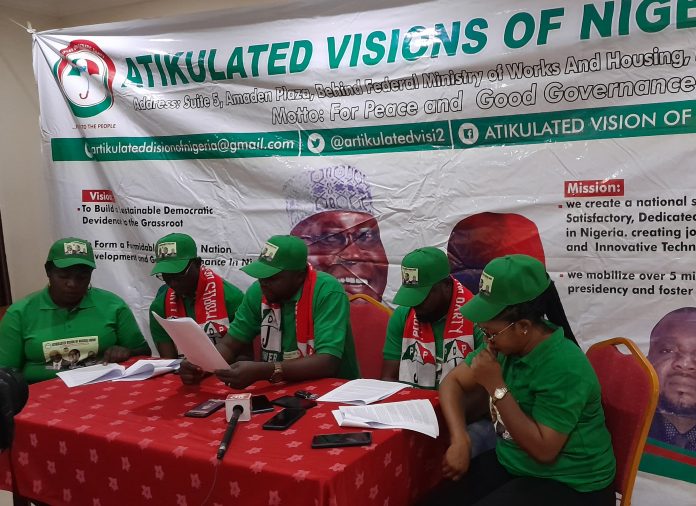 ….As Group vows to mobilise four million votes for Atiku in 2023 presidential election

Ebonyi while fielding questions from newsmen on the sideline stressed that the PDP is not afraid of the Peter Obi movement as movement is different from possessing Voters card. Adding that PDP has done it before and will do it again.

Comrade Ebenyi said, the Atikulated Visions of Nigeria is a specialized Campaign Organization which was established to contact and mobilize electorates with Personal Voter’s Cards (PVCs) across the length and breadth of Nigeria to ensure the victory of Alhaji Atiku Abubakar during presidential election, as well as other PDP candidates in the 2023 general elections.

“We are all united in the vision and mission of campaigning for Alhaji Atiku Abubakar and other candidates aspiring for various positions under the Peoples Democratic Party (PDP) nationwide, for the forth coming General election come 2023.

”Our National Executive Committee consists of 50 members mobilized from the various states while we a 25-man EXCO at state level and another 25-man EXCO at each of the 774 Local Government Areas.

As a true and focused campaign organization we have 15-member Ward EXCO at each of the 313,575 Wards nationwide. In addition, we have a structure that boasts of two Agents per polling unit to monitor, guide and protect votes cast in each polling unit.