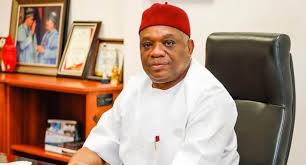 …takes PDP’S Mao, Others to the cleaners

The Abia State Chapter of the ruling All Progressive’s Congress (APC) has slammed a group which convened in its name to work against the re-election bid of the Senate Chief Whip, Orji Uzor Kalu after they accused the former Governor for allegedly working against the interest of the Party’s Governorship Candidate , Ikechi Emenike in the state.

The group which convened under the name “Concerned members of Abia North APC” had in a press statement made a series of allegations against the former Governor, which they claimed were working against the interest of the Party and Ikechi Emenike of the APC.

However, in a swift reaction contained in a statement issued on Wednesday by the Party’s publicity secretary in the state, Chief Okey Ezeala ,the APC denied the existence of such a group in its fold. The Party also stated that none of its members belonged or attended any of such meetings as being peddled to have been held in Umuahia.

According to Ezeala the rumoured gathering was as a result of petty political blackmail initiated by hired PDP apologists loyal to the candidate of the People’s Democratic Party (PDP) Mao Ohuabunwa and other opponents who are obviously threatened by the giant strides of APC in Abia north under the Leadership of Senator Kalu.

While enjoining the general public to disregard the news , the Party in its statement reinstated its solid support for the re-election of Senator Orji Kalu , expressing satisfaction in his leadership drive to boost the fortunes of the party in the 2023 general elections.

“The attention of the All Progressives Congress Abia State Chapter has been drawn to a recent publication purporting to have emanated from APC members of Abia north senatorial district; wherein a certain Mao Ohuabunwa of PDP was mentioned.”

“Abia APC wishes to clarify that NO MEMBER NOR STAKEHOLDER OF ABIA APC ever held such meeting as rumored and therefore enjoin the general public to disregard the petty political blackmail of hired PDP apologists who are obviously threatened by the giant strides of APC in Abia north under the leadership of Our popularly elected Sen. Dr. Orji Uzor Kalu and the rest of the Stakeholders in quality representation, law making, constituency outreach and public infrastructure from the APC led federal government.”

“While we are not perturbed by the antics of our opponents, we implore our teeming supporters to focus on the rescue and development of the Abia mission of Abia APC 2023.”