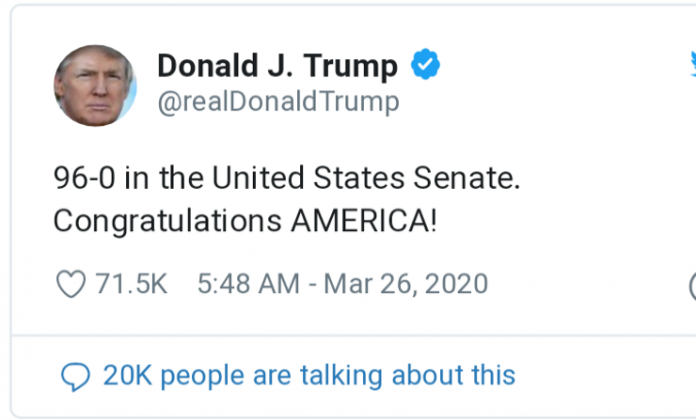 By a vote of 96-0, the Senate passed a massive $2 trillion coronavirus stimulus compromise package just before midnight Wednesday, ending days of deadlock and sending the bill to the House of Representatives — which House Speaker Nancy Pelosi said will soon take up the historic measure to bring relief to individuals, small businesses, and larger corporations “with strong bipartisan support.”

The 880-page legislation is the largest economic relief bill in U.S. history. Senate Majority Leader Mitch McConnell, R-Ky., appeared somber and exhausted as he announced the vote. He released senators from Washington until April 20, though he promised to recall them if needed.

The unanimous vote came despite misgivings on both sides about whether it goes too far or not far enough. The vote capped days of difficult negotiations as Washington confronted a national challenge unlike any it has ever faced. Unemployment numbers were set to be revealed Thursday morning, and experts warned they could reach alarming new highs.

Further, the bill allocates $250 billion to extend unemployment insurance to more workers, and lengthen the duration to 39 weeks, up from the normal 26 weeks. $600 extra a week would be provided for four months. (Just before voting on the final package began late Wednesday, the Senate was debating an amendment from Sen. Ben Sasse, R-Neb., to bar people from getting more from new unemployment benefits than they would have received on the job; the amendment needed 60 votes and failed 48-48.)

The final package would additionally provide $349 billion in loans to small businesses — and money spent on rent, payroll and utilities becomes grants that don’t need to be paid back. Many hotels would qualify as small businesses under the plan.

Passenger airlines would receive $25 billion for workers’ “salaries and benefits,” plus up to $25 billion more in loan guarantees and loans. Contract workers would also receive $3 billion in assistance. Airlines would have to agree not to furlough workers until at least the end of September in return.