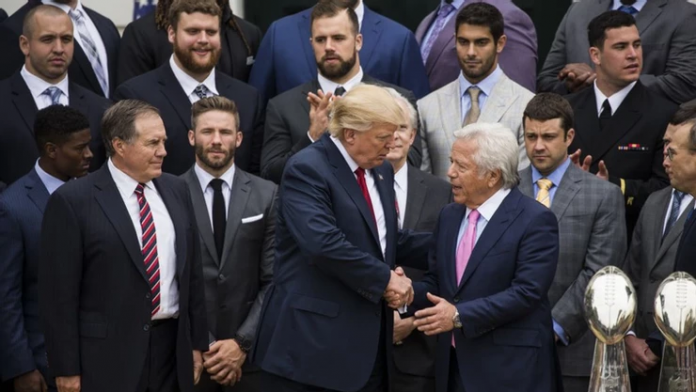 New England Patriots owner Robert Kraft, responding to the warning of Massachusetts Governor Charlie Baker that his state is in dire need of protective equipment including masks, sent his team jet to China to transport 1.7 million masks from China, donating $2 million, half of the cost of securing them.

The Wall Street Journal reported that Kraft’s actions were triggered by Massachusetts Gov. Charlie Baker, who believed had secured over one million masks from Chinese manufacturers, but didn’t know how to transport them, given the situation with flights in and out of China. He spoke to Robert Kraft’s son, the president of the Patriots and also chairman of the board at Massachusetts General Hospital. The Journal continued, “Gov. Baker, the U.S. State Department, Robert Kraft and others sent letters to China’s consul general in New York requesting the special permits. The letters, dated March 24 to 30, ask for waivers to allow the humanitarian mission and state that no member of the crew would leave the aircraft.”

As Politico reported, “Gov. Charlie Baker will greet the National Football League team’s plane when it arrives at Logan Airport with Patriots owner Bob Kraft and Lt. Gov. Karyn Polito. From there, the state’s National Guard will transport the equipment to a strategic stockpile in Marlboro, Mass., according to the person familiar with the plans.”

Kraft told The Wall Street Journal, “I’ve never seen so much red tape in so many ways and obstacles that we had to overcome. In today’s world, those of us who are fortunate to make a difference have a significant responsibility to do so with all the assets we have available to us.”

As of Wednesday, more than 7,700 cases of coronaviruses had been confirmed in Massachusetts; over one thousand additional cases were reported on Wednesday, and 122 people have died. Politico noted, “The state converted an arena in Worcester, Mass., into a 250-bed field hospital Wednesday as it prepares for an influx in patients, and is eyeing a Boston convention center as another possible hospital site.”