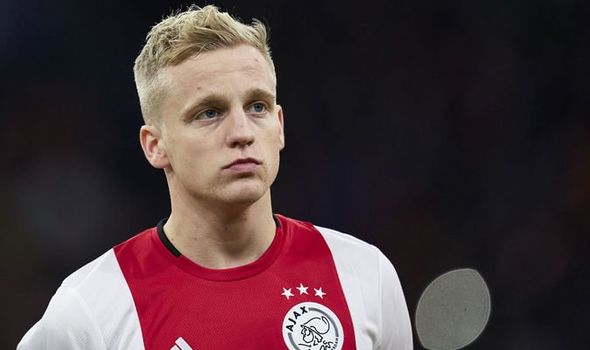 Spurs target Donny van de Beek will be allowed to leave Ajax this summer. Edwin van der Sar, the current Ajax chief executive, confirmed a verbal agreement with Van de Beek that means he can leave the club in the upcoming transfer window.

“Last year, we made verbal agreements with [Andre] Onana, [Nicolas] Tagliafico and Van de Beek to stay another season, and then we look to help each other and find the next step in their careers,” Van der Sar revealed. “Nothing has changed.”

This comes after Van de Beek’s agent, Guido Albers, told the Daily Star that Spurs are interested in the Dutch midfielder.

“There is interest – and that is also known – for a long time and from several clubs. We will see what will eventually come out of that in the coming weeks,” Albers said. “I do not dare say anything about that at the moment. I can’t say anything about it because some things are just confidential.”

Stoke City’s Mohamed Sankoh is attracting interest from elite clubs in the Premier League. And according to Football Insider, Spurs are one of them.

The 16-year-old, who has been capped for Holland under-17s, is yet to sign a professional contract with Stoke, which he cannot do until his 17th birthday in October.

This opens the door for the likes of Spurs to agree a professional agreement with the Sankoh, who is reportedly keen on a move to an elite club as he looks to further his development.

Everton, Celtic and Chelsea are also interested. The teenager scored nine goals and provided nine assists at the under-18 level this season.