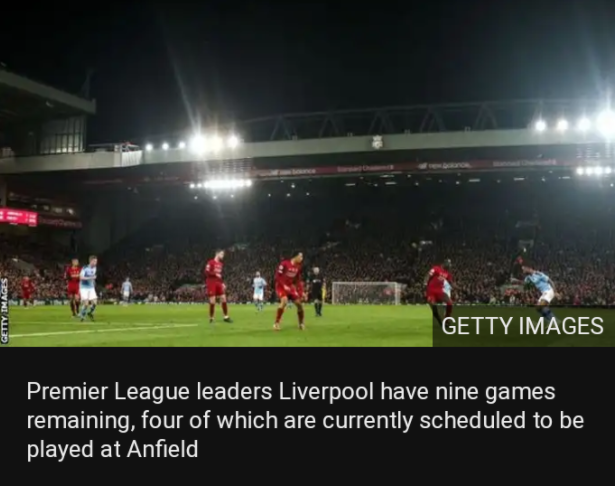 Premier League clubs have been told they could have to repay an estimated £340m to domestic and international broadcasters – even if the season resumes behind closed doors.

And BBC Sport has learned the clubs were warned on Monday that figure could rise if the season is curtailed or if relegation is scrapped.

Items including playing matches at neutral venues were also discussed.

The refund has been requested as matches are not taking place as expected – both because they will be played without fans and at different times to originally scheduled.

Premier League chief executive Richard Masters had previously predicted a loss of “at least £1bn” if the Premier League failed to complete the 2019-20 season.

“We were able to update our clubs today on our situation with broadcasters, which is obviously confidential,” Masters said on Monday.

“Whatever happens, there’s going to be significant loss of revenue for clubs. That is inevitable.

But in terms of putting an estimate on it, I don’t want to do that today.”

The Premier League says it has listened to the objections of some clubs to the use of neutral grounds if the season resumes, and will support them in putting those views to the authorities.

Masters said the organisation was in “ongoing dialogue” with the government, police and ground safety officials.

“Everybody would prefer to play at home and away if at all possible, and it’s clear to see some clubs feel more strongly about that than others,” he said after a shareholders’ meeting.

He said clubs had argued against using neutral grounds because fans could be trusted not to gather in large numbers at their stadiums.

“I think some of our clubs would argue that in relation to policing their own fans that they have a good relationship with them,” Masters said.

“They can encourage their own fans not to turn up outside their home venues while they’re playing behind closed doors, and they’re in a better position to control that, but it’s not a matter of convincing – this has to be a decision that’s come to mutually.”

He said “a really strong collective will to complete the season remains” but admitted “curtailment” of the season was discussed for the first time on Monday.

Two weeks ago clubs were told neutral stadiums were the only way the season could be completed, because authorities were concerned about fans congregating outside home grounds and breaching social distancing rules.

significant majority of the clubs are understood to be opposed to the proposal, with Watford, Aston Villa and Brighton coming out publicly against it.

Those clubs now want the chance to show they can deliver home and away matches safely, and league bosses are behind them.

“Since Covid became an issue we’ve been talking to the authorities about the conditions in which we could get the Premier League back up and running and taking all that advice on board, but it is an ongoing dialogue,” said Masters, speaking for the first time since the season was suspended.

“But all must be cognisant of what authorities are telling us, and we’ll continue with that consultation.”

The government is understood to have “open ears” regarding neutral venues and is prepared to discuss the matter. However a final decision is likely to rest with the police and ground safety officials, who have to grant licences to venues.

Liverpool mayor Joe Anderson told the BBC he feared thousands of Reds fans would gather outside Anfield to celebrate the title, even if matches were played at neutral venues.

However, recently retired West Yorkshire chief superintendent Owen West told the Guardian the use of neutral stadiums had “no rationale”, and such a proposal was not being enforced in Germany where the Bundesliga hopes to resume this weekend.

Thursday, 14 May: Meetings between Premier League and PFA/LMA about medical protocols

Thursday, 14 May: Meeting between Culture Secretary and football authorities

Monday, 18 May: Next Premier League meeting

25 May: Uefa deadline for leagues to have finalised plan for restarting seasons

‘Collective will to complete the season’

Despite mounting tension and division over the use of neutral stadiums, Masters said Monday’s five-hour meeting showed a “strong desire to discuss everything in the round, and to agree a collective way forward”.

He insisted a “really strong collective will to complete the season remains”.

But he also admitted a cancellation of the season was discussed for the first time.

“It’s the first time we’ve discussed curtailment,” he said. “It’s still our aim to finish the season obviously, but it’s important to discuss all of the options with our clubs.

“Obviously we won’t be playing until the middle of June. It doesn’t seem quite right to be talking about playing before we’ve taken a decision to return to the first stage of training.

“But in terms of how those matches will take place there’s a lot of water to pass under the bridge, and we’ll continue to assess the circumstances then.”

Masters said the issue of scrapping relegation had not been raised at any Premier League meetings.

“Not in our meetings, last week or today,” he said. “All I can go on is what we’re discussing in our meetings. And you specifically asked about scrapping relegation while playing out the season, and that has never been raised in our formal meetings at all.”

The issue of contracts was discussed, with some players due to be out of contract at the end of June.

“What was agreed was that players can extend their contracts until the end of the season,” said Masters.

“It must be agreed by both parties.”

“I think really the talk at the moment should be about the tentative steps we are taking now that the announcements have been made about getting back to training, and only once players have been consulted.”

Players and managers will be consulted on proposed medical protocols for a return to training by the PFA and LMA over the next two days, before meetings with the Premier League on Thursday. If the measures are accepted, an initial phase of group training could begin next week.