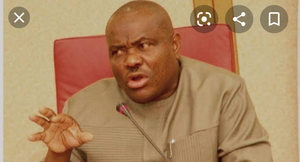 Deputy National Publicity Secretary of the All Progressives Congress APC, Yekini Nabena has accused the Rivers State Governor, Nyesom Wike of playing a leading role in “killing” the Nigerian Governors’ Forum, challenging him to explain the part he played when the Peoples Democratic Party, PDP, Administration introduced the “16 is greater than 19” political formula in the Forum.

Addressing journalists Tuesday in Abuja, Nabena, said Gov. Wike is still living in the past when impunity was the order of the day, adding that the governor needs to wake up to the reality of a new era of justice, fairness and true democracy under the administration of the APC.

The governor had on Monday described the Nigerian Governors’ Forum as “a toothless bulldog”, accusing the APC-led Federal Government of destroying the forum immediately it came to power in 2015.

He said; “Does Gov. Nyesom Wike think Nigerians can forget in a hurry the major role he as a PDP minister played when the then Rivers State Governor, Rotimi Amaechi scored 19 votes, but former Plateau State Governor, Jonah Jang who scored 16 votes was recognized as Chairman of the Forum?

Wike also needs to be reminded on the major role he played as a foot soldier who engineered the banning of the then Bayelsa State Governor Timipre Sylva from participating in the PDP governorship primary election in 2011.

“If the Forum has been ‘killed’ as Wike states, it is clear who the killer and grave digger is”, Nabena submitted