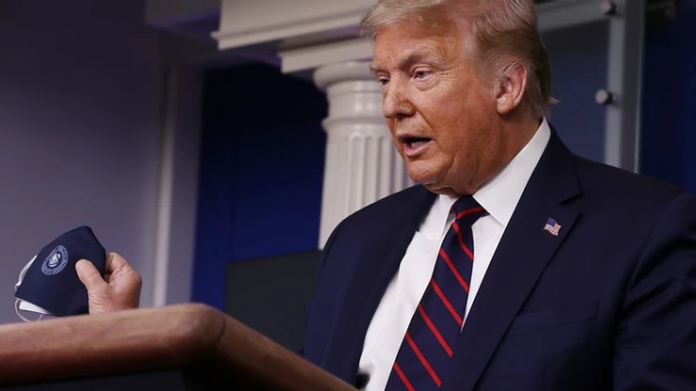 President Donald Trump has warned the US pandemic may “get worse before it gets better”, as he revived his virus briefings with a more scripted tone.

The president, who was not wearing a mask at the briefing, has previously disparaged them as unsanitary.

His aides have reportedly pressed him to adopt a more measured approach as virus caseloads spike across the US.

The daily White House news conferences ended soon after Mr Trump suggested in April during freewheeling remarks from the podium that the virus might be treated by injecting disinfectant into people.

In his first White House coronavirus briefing for months on Tuesday, a less off-the-cuff president echoed what public health officials on his pandemic task force have been saying as he warned: “It will probably unfortunately get worse before it gets better.

“Something I don’t like saying about things, but that’s the way it is.”

He added: “We’re asking everybody that when you are not able to socially distance, wear a mask, get a mask.

“Whether you like the mask or not, they have an impact, they’ll have an effect and we need everything we can get.”

Mr Trump – who more than once referred to Covid-19 as the “China virus” – took a mask from his pocket in the briefing room, but did not put it on.

The president is facing an uphill climb to re-election in November against Democratic challenger, Joe Biden, according to opinion polls.

Mr Biden on Tuesday accused Mr Trump of having failed Americans in his handling of the pandemic. “He’s quit on you, he’s quit on this country,” the former US vice-president said.