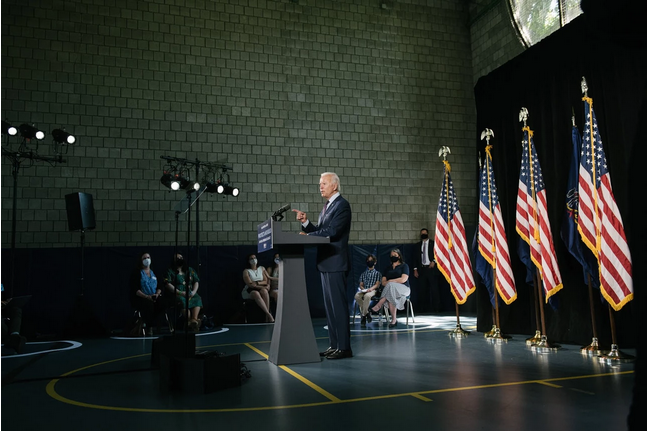 Queen Elizabeth II threw him an extravagant state banquet at Buckingham Palace. Former Prime Minister Theresa May welcomed him to Blenheim Palace, the family seat of his hero, Winston Churchill. Her successor, Boris Johnson, refused to join a global chorus of criticism after he ordered troops to break up a Black Lives Matter protest outside the White House.

Few countries have worked harder than Britain to please President Trump. But now, with Mr. Trump trailing in the polls to former Vice President Joseph R. Biden Jr., British officials are waking up to an unsettling prospect: The president they tried so hard to accommodate may be out of power next year.

In Paris and Berlin, a Trump defeat would be welcomed as an unalloyed relief, removing a leader who has sundered alliances, threatened a trade war, and tried to dismantle the European project. But in London, where Mr. Johnson’s government just left the European Union, it is more complicated.

At a moment of British isolation, Mr. Trump’s full-throated endorsement of Brexit has made the United States a safe harbor. His promise of a lucrative trade deal gave Mr. Johnson a selling point with his voters. His populist politics were in sync with the bare-knuckle tactics of the Brexiteers.

If Mr. Biden wins in November, Britain would face a president who opposed Brexit, would look out for the interests of Ireland in a post-Brexit Europe, and would have little motive to prioritize an Anglo-American trade deal. His former boss, President Barack Obama, once warned Britons that if they left the European Union, they would put themselves at the “back of the queue” in any trade talks with the United States.

“It will not be lost on Biden that the last two British prime ministers went out of their way to be nice to and about Trump,” said Peter Westmacott, a former British ambassador to the United States. “He is instinctively comfortable with Brits, but London will have to work on the relationship.”

As Mr. Trump’s polling numbers have eroded, pro-government papers have begun to make the case that a President Biden would actually be better for Britain than President Trump. Unlike Mr. Trump, he is a believer in alliances. He would not subject Mr. Johnson to rude lectures about the need for Britain to take a harder line against China. He would not be toxic with much of the British public.

In a recent column in The Sunday Times, a well-connected political journalist, Tim Shipman, quoted an unnamed government minister saying that a Trump defeat ‘‘would make things much easier.’’

That sounds like a government hedging its bets. Mr. Johnson has been careful to say nothing about the American election but he has already tried to keep Mr. Trump at arm’s length even as he avoids offending him. Mr. Trump, by contrast, called into a London radio show in the heat of the British election to praise Mr. Johnson and run down his opponent.

Britain’s uneasiness is compounded by the strangeness of this election. The Biden campaign has all but banned contact with foreign governments to avoid the questions that dogged the Trump campaign in 2016 about its ties to Russia. The pandemic has deprived Britain of its long practice of embedding a diplomat in the challenger’s campaign because there is little in-person campaigning.

Jonathan Powell, who as a young British diplomat rode on the bus during Bill Clinton’s 1992 campaign, said the connections he made were valuable in smoothing over bitterness Mr. Clinton’s aides felt toward Britain’s Conservative government after it had tried to dig up incriminating details about Mr. Clinton’s years at Oxford to help George H.W. Bush’s campaign. Mr. Powell later introduced Mr. Clinton to Tony Blair, who went on to become prime minister and a friendlier counterpart.

Riding the bus is less important this time, he said, given that Mr. Biden is already so well-known to British officials. But the lack of a personal connection may foretell a relationship that is destined to become more distant.

The risk for Britain, several experts said, is not a sudden rupture but a gradual slide into irrelevance. Mr. Biden’s emphasis, they said, would be on mending fences with Berlin and Paris, not celebrating a “special relationship” with London that got plenty of attention from his predecessor.

On a visit to London in October 2018, Mr. Biden, not yet a candidate, cast his opposition to Brexit in geopolitical terms, saying it would make Britain less valuable to the United States as a lever to influence the European Union.

Had I been a member of Parliament, had I been a British citizen, I would have voted against leaving,” Mr. Biden said at Chatham House, the London research institution. “U.S. interests,” he added, “are diminished with Great Britain not an integral part of Europe.”

British officials recognize the challenge. They cite human rights and Russia as areas where Britain could carve out a robust role alongside the United States. Mr. Johnson’s recent reversal, barring the Chinese telecommunications giant Huawei from access to its 5G network, brings Britain in line with a more hawkish American policy toward China, which is likely to extend beyond Mr. Trump’s presidency.

He may need to patch up other lingering issues. In 2016, when Mr. Johnson was mayor of London, he recounted in a newspaper column that Mr. Obama replaced a bust of Churchill in the Oval Office with one of Martin Luther King Jr., and attributed the switch to “the part-Kenyan president’s ancestral dislike of the British Empire.”

Some say fears of tension between Mr. Johnson and Mr. Biden are overblown.

“It’s part of the job for American presidents to get along with prime ministers,” said Tom Tugendhat, a Conservative member of Parliament who is chairman of the Foreign Affairs Committee and has spoken with advisers to Mr. Biden.

Still, there are potential land mines, not least Northern Ireland. A devoted Irish-American, Mr. Biden will fiercely defend Ireland’s interests, as will his allies in the Democratic Party’s Irish lobby on Capitol Hill. In speeches, Mr. Biden’s go-to literary reference is from ‘‘Easter 1916,’’ a poem by the Irish poet William Butler Yeats about the Irish uprising against British rule.

British diplomats gamely point out that Mr. Biden has English roots, too. He has talked of a great-great-great grandfather who was a captain in the British East India Trading Company. But they say that as far as Brexit goes, his primary concern is likely to be the preservation of the Good Friday Agreement, the Clinton-era accord that ended decades of sectarian strife in Northern Ireland.