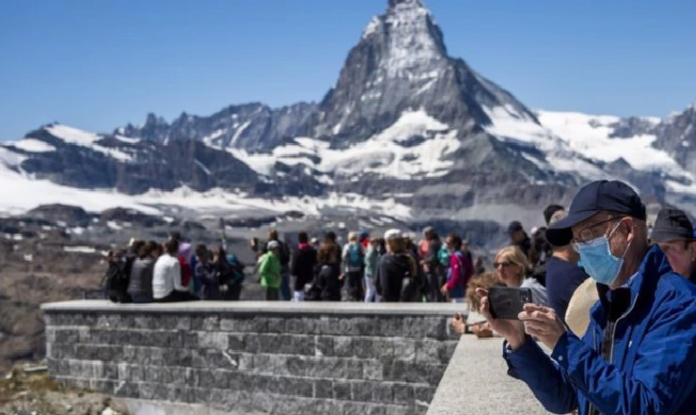 Travellers in Switzerland, Jamaica and Czech Republic who return to the UK from 04:00 BST on Saturday will have to self-isolate for two weeks.

The UK government said the move was needed to keep UK infection rates down.

People arriving in Scotland from Switzerland are already required to self-isolate .

Cuba, where there has been a drop in cases, will be added to the list of destinations people can return from without entering quarantine.

The UK considers imposing quarantine conditions when a country’s rate of infection exceeds 20 cases per 100,000 people over seven days.

The government said there has been a “consistent increase” in the weekly case rate in Switzerland over the past four weeks, with cases per 100,000 rising from 18.5 to 22 over the past week.

Meanwhile, the Czech Republic has seen a “consistent increase” over the past three weeks, with a 25% spike from 1,723 between August 14 and 20 to 2,153 over the following seven days.

More than 1.6 million Britons travelled to Switzerland last year, the Swiss Tourism Federation said, drawn by the Alps and the mountain air..

The Czech Republic sees more than 300,000 British tourists every year, according to the Foreign and Commonwealth Office. The capital Prague is a popular destination for city breaks and stag dos.

Katarina Hobbs, director of CzechTourism UK and Ireland, insists the country “remains a safe country to travel to”, adding she hoped the British government would reconsider its decision “very soon”.

The Foreign Office is now advising against all but essential travel to the Czech Republic, Jamaica and Switzerland.

UK tourists in those countries are being told to follow local rules and check the FCO travel advice.

In a tweet , Transport Secretary Grant Shapps warned British holidaymakers to “only travel if you are content to unexpectedly 14-day quarantine on return”.

People wishing to avoid the need to self-isolate now face a race to get back to the UK before the quarantine deadline.

Simon Calder, travel editor of the Independent, told the BBC fares “went through the roof” within minutes of No 10’s announcement, with airlines including British Airways adding extra flights to Heathrow from Prague, Geneva and Zurich priced at about “£300 one way”.

He also wrote in the Independent , that a “significant number” of UK tourists with family connections to Jamaica are understood to be on the Caribbean island but warned it might be too late for them to return by Saturday’s deadline if they missed Thursday’s overnight flights – which go through America.

He advised travellers leaving Switzerland to avoid flying via Basel airport as its terminal and runway sit inside French territory, and, according to the DfT, would trigger the need to quarantine.

In July, thousands of guests sat at a 500 metre-long (1,640ft) table on the Charles Bridge in Prague at a party held to give the coronavirus a “symbolic farewell”.

The event’s organiser said the celebration in the Czech capital was possible due to a lack of tourists in the city.

In Switzerland, a state of emergency was declared in March, with the government ordering the closure of schools, restaurants, bars and all the ski slopes.

But by June, as cases of Covid-19 started to fall across Europe and more travel was permitted, it reopened its mountain railways and cable cBBC.