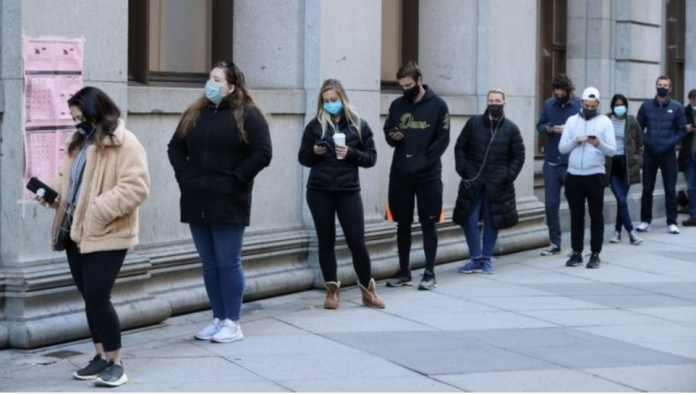 Early results from the US presidential election, pitting Donald Trump against Joe Biden, show a tight race in the potentially pivotal race of Florida.

With more than 80% of votes counted in Florida, Mr Trump, the Republican incumbent, was neck-and-neck with Mr Biden, the Democratic challenger.

It is too early to project who won in several other key states – Georgia, Pennsylvania, Ohio and North Carolina.

The vote caps a long and bitter campaign amid the coronavirus pandemic.

More than 100 million people had already cast their ballots in early voting.

The US appears on course for its highest turnout in a century. The first projections are expected shortly from states which are solidly Democratic or Republican.

Control of Congress is also at stake. As well as the White House, Republicans are vying to hang on to a Senate majority.

The House of Representatives is expected to stay in Democratic hands.

What are the results so far?

After polling stations closed across the US East Coast, Pennsylvania, Georgia, North Carolina and Ohio looked as though they could go either way in the White House race.

Both Florida and Pennsylvania are considered must-wins for Mr Trump if he is to be re-elected to a second term in office.

No surprises have emerged yet in the other states.

The BBC projects Mr Biden will win his home state of Delaware, along with Vermont, Maryland, Massachusetts, New Jersey and Washington DC.

Mr Trump, who is watching the returns from the White House, is expected to address the nation later on Tuesday evening.

Projections are based on a mixture of exit poll data and, in most cases, actual votes counted – and are only made where there is a high degree of certainty.

National polls give a firm lead to Mr Biden, but it is a closer race in the states that could decide the outcome.

According to Anthony Zurcher BBC North American Reporter, Polls in the eastern half of the US are closing fast now. While Florida appears to be trending toward Donald Trump – on the back of better-than-expected performance among Hispanics in South Florida – attention will shift towards other battleground states.

Joe Biden has taken an early lead in Ohio, although the counties that have been reporting are Democratic ones. However, if he can do better than Hillary Clinton, who lost the state, it could give clues as to how he’ll perform in the nearby states that were much closer – Pennsylvania, Michigan and Wisconsin, in particular.

Georgia continues to look like a tossup, as does North Carolina. Both are pretty much must-wins for Trump. And Texas looms on the horizon. While Florida is the big electoral prize that has been a fixation for Democrats for decades, if Texas moves to the left, it could herald an even more earth-shattering electoral realignment.

In the US election, voters decide state-level contests rather than an overall, single, national one.

Appearing in his home state of Delaware, Mr Biden said he was “hopeful” and highlighted the “overwhelming turnout particularly of young people, of women”.

A senior Biden adviser told CBS News – the BBC’s US partner – that the Biden team “feel good”. Florida was in the balance, but Democratic numbers were strong in a swathe of swing states, including Wisconsin, Pennsylvania, North Carolina, Georgia and Arizona.

An exit poll conducted by Edison Research and just published by Reuters suggests that four out of 10 voters nationally think the handling of the coronavirus pandemic in the US is “going very badly”.

A third of voters cited the economy as the issue that most concerned them, according to the poll.

Both candidates have been using election day as an opportunity to drive home the messages they have been hammering to voters for the last few weeks.

The two rivals have radically different policies on key issues. They have clashed bitterly during the campaign over how to handle the Covid-19 pandemic, and how to best handle the economy during this difficult period.

Mr Biden has accused Mr Trump of a haphazard response to the pandemic that he says has needlessly cost too many lives. But Mr Trump has downplayed the impact of Covid-19, saying the country is “rounding the corner”.

Earlier on Tuesday, Mr Trump, sounding a little hoarse, spoke to Fox News by phone, saying he felt good about his chances of victory and predicting he would win “big” in key states such as Florida and Arizona.

“I think we have a really solid chance of winning,” he said. Asked when he would declare victory, he added: “When there’s victory. If there’s victory… there’s no reason to play games.”

Mr Biden also visited his childhood home in Scranton in Pennsylvania – a key swing state – and addressed a crowd in the town, saying: “We’ve got to restore the backbone to this country. The middle class built this country – Wall Street didn’t.”