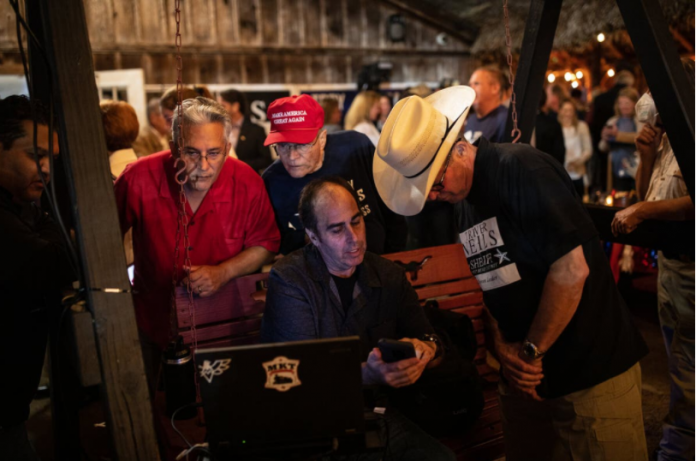 President Trump won a series of key battlegrounds early on Wednesday morning, including Florida, Ohio and Iowa, as Joseph R. Biden Jr. expressed confidence he would ultimately prevail across key Northern states and Arizona as the presidential contest turned into a state-by-state slog that could drag deeper into the week.

“We believe we are on track to win this election,” Mr. Biden said in a brief speech after 12:30 a.m. Eastern, saying he was “optimistic” about the outcome once all the votes were counted.

No full states had yet flipped from their 2016 results as of 1 a.m., but several key states had huge portions of ballots still to be counted. Mr. Biden did flip a single Electoral College vote that Mr. Trump had won in 2016, carrying Nebraska’s 2nd Congressional District, which includes Omaha.

So far, Mr. Trump was holding off Mr. Biden in two Southern states that the former vice president had hoped to snatch back from the Republican column: Georgia and North Carolina. These were not must-win states for Mr. Biden, but he spent heavily in both states and visited them in the final stretch of the campaign. Mr. Biden lost Texas, a long-shot hope that some Democrats invested in late in hopes of earning a landslide repudiation of Mr. Trump that did not arrive.

Georgia has not gone Democratic since 1992. But while Mr. Trump held a narrow lead, much of the remaining vote to be counted appeared to be in the greater Atlanta area, where Mr. Biden performed strongest.

Shortly after Mr. Biden spoke, Mr. Trump responded on Twitter, misleadingly saying he was “up big” and claiming without evidence that “they are trying to STEAL the election.” Twitter immediately marked it as content that was “disputed and might be misleading.”

The most encouraging sign on the map for Mr. Biden was in Arizona, where he was leading in a state that Mr. Trump won in 2016. He won New Hampshire and Minnesota, two states that Hillary Clinton had only narrowly carried four years ago and that Mr. Trump had once hoped to flip in 2020.

Mr. Biden’s win in Nebraska’s 2nd District was only one of the 270 Electoral College votes that he needs. But it could prove important. It opened a potential pathway to the White House without winning Pennsylvania, if Mr. Biden carried all the states that Mrs. Clinton did and added Michigan, Arizona and Wisconsin, plus Nebraska’s lone vote.

In a briefing for donors on Tuesday night, Biden campaign officials acknowledged underperforming among Cuban-Americans in the Miami area, but saw positive signs with their strength in some suburbs in Ohio that they said could be predictive across the Midwest, according to two people familiar with the matter.

Campaign officials signaled that Biden’s team was preparing to wait for votes to be counted in three Northern battlegrounds that Mr. Trump carried in 2016 — Pennsylvania, Michigan and Wisconsin — where it still feels bullish.

North Carolina and Arizona could still be called relatively quickly, but vote-counting in Michigan and Wisconsin is not expected to be completed on Tuesday. And Pennsylvania won’t start counting its early votes until tomorrow; that could draw on through the end of the week.