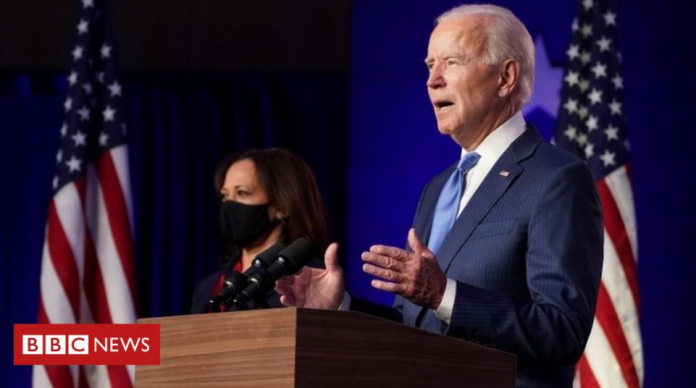 Joseph R. Biden Jr. achieved victory offering a message of healing and unity. He will return to Washington facing a daunting set of crises.

Joseph R. Biden Jr. offered himself as a safe harbor for a broad array of Americans during his third campaign for the presidency.

Joseph R. Biden Jr. offered himself as a safe harbor for a broad array of Americans during his third campaign for the presidency.Credit…Ruth Fremson/The New York Times

Joseph Robinette Biden Jr. was elected the 46th president of the United States on Saturday, promising to restore political normalcy and a spirit of national unity to confront raging health and economic crises, and making Donald J. Trump a one-term president after four years of tumult in the White House.

Mr. Biden’s victory amounted to a repudiation of Mr. Trump by millions of voters exhausted with his divisive conduct and chaotic administration, and was delivered by an unlikely alliance of women, people of color, old and young voters and a sliver of disaffected Republicans. Mr. Trump is only the third elected president since World War II to lose re-election, and the first in more than a quarter-century.