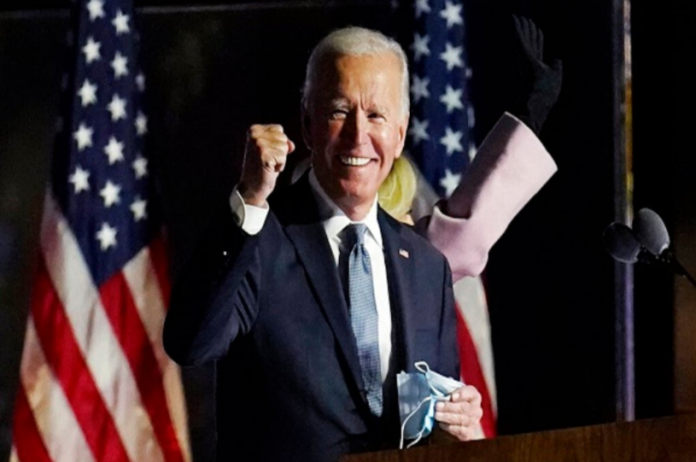 China says it has taken note of Joe Biden’s declaration of victory in the US presidential election but is holding off on sending any message of congratulations.

Foreign ministry spokesperson Wang Wenbin said on Monday the result of the election would be determined under US laws and procedures, and Beijing would follow international practices in extending its sentiments.

China has had a fractious relationship with President Donald Trump, characterised by growing friction over trade, technology and competition for influence in Asia and the world, with the two powers sparring over issues from blame for the COVID-19 pandemic to Beijing’s human rights record in Xinjiang and Hong Kong.

Analysts say Biden will likely return ties to a less contentious state, although Beijing has stuck throughout the election to a position of not commenting directly on what it says is an internal American political issue.

“I noticed that Mr Biden has declared victory of the election,” Wang told reporters at a daily briefing. “We understand that the presidential election result will be determined following US laws and procedures.”

In 2016, President Xi Jinping sent congratulations to Trump on November 9, a day after the election.

China is one of only a small number of high-profile nations, including Russia and Mexico, that have yet to issue statements on the election, in which Democrat Biden emerged the winner over Republican incumbent Trump after days of ballot counting. Trump has yet to concede and is challenging counting in several districts.

“Since when does the Lamestream Media call who our next president will be?” Trump said in a tweet on Sunday.

Relations between China and the US are at their worst in decades over disputes ranging from technology and trade to Hong Kong and the coronavirus, and the Trump administration has unleashed a barrage of sanctions against Beijing.

While Biden is expected to maintain a tough stance on China – he has called Xi a “thug” and vowed to lead a campaign to “pressure, isolate and punish China” – he is likely to take a more measured and multilateral approach.

Wang Huiyao, head of the Center for China and Globalization and an adviser to the government in Beijing, said he expects more dialogue under a Biden administration.

“Biden’s election means an opportunity to re-establish relations with the US as he is more likely to uphold multilateralism. That means China and the US can start discussing issues including climate change, pandemic control and trade,” Wang said.

Hu Xijin, editor of the Global Times, a tabloid published by the ruling Communist Party’s People’s Daily, said in a tweet: “China hasn’t congratulated Biden on his victory as quickly as Western countries did”.