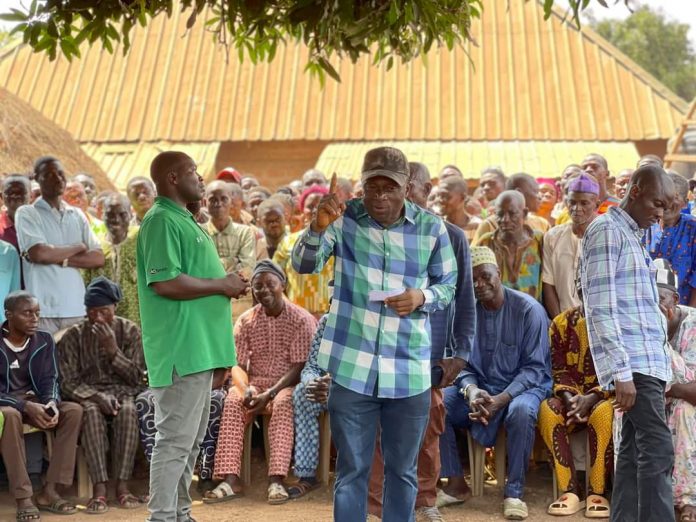 Markurdi – Governor Samuel Ortom has cleared speculations to his rumoured senatorial ambition as he formally sought the blessings of his kindmen to contest the Benue North West senatorial seat.

The Governor at a meeting with his Nzorov kinsmen comprising traditional rulers and other leaders on Saturday, March 5th, 2022 told them that he is now convinced to contest the Zone B Senate seat on the platform of the People’sDemocratic Party, (PDP).

ThIs was contained in a statement signed by the Chief Press Secretary to the Governor, Nathaniel Ikyur made available to Peionews political correspondent in Abuja on Saturday.

According to the statement, the district head of Nzorov, Chief Gwatse Akaahena who spoke on behalf of traditional and political leaders gave their nod and affirmed their support for the governor to go ahead and run for the senate seat.

The traditional ruler said they were in full support of their son to not only contest and win the senate seat but also conquer higher offices.

Governor Ortom had in a short address to his kinsmen, informed them that he had finally being convinced that God has confirmed to him to contest for the election and requested if they were in agreement with the vision.

The Governor thereafter, spoke with the Nzorov Council Ward Executive Council of the PDP where he also got their blessings to contest for the Zone B Senate in 2023.

The Nzorov Council Ward Chairman of the PDP, Hon Ezekiel Adikpe JP, spoke on behalf of the party from the Governor’s council ward.

The Governor is billed to also extend his consultations to the PDP EXCO in Guma as well as party stakeholders in Masev, Ihyarev and Nongov Development Association, MINDA as part of consultations for his Senate ambition.

After this, leaders from the MINDA political axis will meet with Jemgbagh leaders to seek for their blessings and support for the governor ahead of the senatorial election.