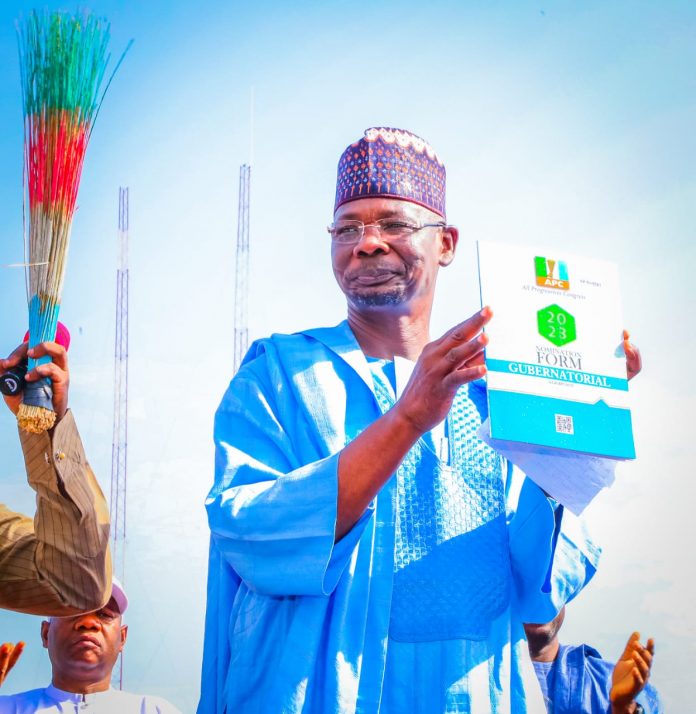 …says his development initiatives will earn him another victory

Lafia – Nasarawa State Governor, Engineer Abdullahi Sule, has declared his intention to seek re-election for a second term come 2023, stressing that the development initiatives of his administration will earn him another victory at the polls.

Engineer Sule made the declaration shortly after being presented with both the nomination and expression of interest forms, purchased on his behalf, by members bof the Engineer A A Sule Amalgamated Support Groups, at a ceremony at the Lafia Square, on Tuesday.

The Governor, who barely returned from Saudi Arabia to observe the Eid-el fitr celebration marking the end of the Ramadan fast, apologized to prominent and critical stakeholders of the ruling All Progressives Congress (APC) in the state, for the impromptu declaration which was supposed to have been a personal event but turned out to be a formal declaration to seek re-election.

Engineer Sule specifically, apologized to the first executive governor of the state and now National Chairman of the APC, Senator Abdullahi Adamu, his immediate predecessor, Senator Umaru Tanko Al-makura, as well as all critical stakeholders of the party, who were not present at his declaration.

While describing the event as significant for him, especially that ordinary people came together to raised the N50m to purchase the forms on his behalf, the Governor however lamented the demise of one of the party’s stalwarts, the late Bala Tafida, who died earlier morning on Tuesday.

He pointed out that, since people who are barely making a living could come together and raise funds to buy both the nomination and expression of interest forms on his behalf, he can’t let them down and as such, has accepted to seek re-election.

The Governor was emphatic that, the development initiatives of his administration, will earn him another victory come 2023.

“Our work is enough to deter any opposition. If anybody said we did not work for the state, such a person should be reminded that Engineer Sule did not hold any government position in his life until he was elected governor.

“However, some people held various government positions for over 13 years and even the road leading to their villages was constructed by us,” he said.

Engineer Sule said he is ready to face the opposition ahead of the 2023 general elections.

Earlier, in a goodwill message, state Deputy Governor, Dr Emmanuel Akabe, said a group of organisations and individuals, approached him while the Governor was away in Saudi Arabia for the Lesser Hajj, to inform him of their decision to obtain the nomination and expression of interest forms on behalf of the Governor.

“They know you can do it yourself, they know you have the capacity but they want to prove to you that they are solidly behind you,” the Deputy Governor said.

According to the Deputy Governor, even though Engineer Sule didn’t make a pronouncement to seek another term in office, the people wanted to show that they are happy with his leadership style.

On his part, state Chairman of the APC, Hon John Mamman, said the Governor’s foray in the area of education, agriculture, investment and his thrust to industrialise Nasarawa State, as well as his focus and vision to improve on the wellbeing of the entire state, are sufficient to guarantee Engineer Sule another term in office.

While calling on the Governor to accept the forms and declare his intention to re-contest come 2023, Hon Mamman assured the Governor of the party’s total support.

Presenting the forms earlier, Hon Murtala Abubakar, Senior Special Assistant (SSA) to the Governor on Sustainable Development Goals (SDGs), who stood on behalf of the Engineer A A Sule Amalgamated Support Groups, said members of the group recognised the need to contribute in their small ways, to enable the Governor consolidate on his vision for the state beyond 2023.

Speakers from across the three senatorial zones of the state namely Senator John Danboyi for Nasarawa North, Hon David Ayewa, for Nasarawa South and Hon Baba Shehu, Keffi Local Government Chairman, for Nasarawa West, all threw their support behind the second term aspirations of the Governor.

Hajiya Ramatu Dalhatu, speaking on behalf of women in the state, sang songs of joy to herald the support of women across the state.