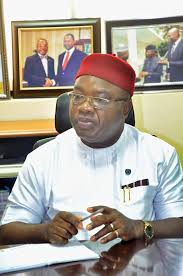 The Executive Secretary of the National Human Rights Commission, Chief Tony Ojukwu SAN has condemned the attack at St. Francis Catholic Church Owo, adding that the massacre is another wakeup call on all Security Agencies to up their game with a view to averting the occurrence of such incidents in future”.

The Executive Secretary who was reacting to the unfortunate incident which claimed several lives, leaving others injured and hospitalized, has urged the Nigerian Police and other relevant Security Agencies to do their utmost best to arrest and prosecute the perpetrators of this dastardly act without further delay.

Ojukwu made the call on Tuesday in a statement signed by the Deputy Director Public Affairs of the Commission, Fatimah Agwai Mohammed made available to Peionews.

According to the statement, the Learned Senior Advocate has also denounced the alleged reprisal attacks on some Hausa settlements by some individuals in Owo, the host Community, saying that such reaction is misguided and highly reprehensible as two wrongs cannot make a right and the law enforcement agents should be allowed to do their job. This will help not to escalate the conflict, the Executive Secretary advised.

He used the opportunity to call on the Federal Government to provide the needed resources to the Security Agencies to do the needful in the protection of lives and properties of innocent citizens, saying “the incessant killings in our dear country has been going on for too long, criminals are operating with impunity all over the land, the Owo massacre is another wakeup call on all Security Agencies to up their game with a view to averting the occurrence of such incidents in future”

Similarly, he called on every one living in Nigeria to play a role in securing the nation; “all hands must be on deck, we should be united in fighting these crimes to protect lives and properties in every part of this nation by always providing intelligence information to Security Personnel and educating other citizens on the essence of peaceful coexistence”

On the survival of those still in hospital which he describes as crucial, Chief Ojukwu urged on well-meaning Nigerians to save the lives of the victims in any way they could help.

The Nation’s Chief Human Rights Officer sympathized with families who have lost their loved ones in the attack and prayed to God to give them the fortitude to bear the irreparable loss.

In another development, the human rights Czar has also condemned the alleged killing of a young man Ahmed Usman over blasphemy at the Lugbe axis of the FCT. He commended the police and other law enforcement agents for arresting 15 of the alleged perpetrators and urged a transparent and fair trial of the suspects to render justice and fair trial to all concerned.

He lamented that jungle justice is gradually eroding the peaceful coexistence in our dear country; he called on the government to put in place necessary measures to check the perpetrators of jungle justice so as not to allow it to become the norm whereby people could be maimed or killed even without any provocation or any opportunity to defend themselves as provided in the 1999 constitution of Nigeria.

He advised aggrieved parties that taking laws into their hands cannot be an option in any situation, saying we should learn to be civil and law-abiding in championing any cause or ventilating our grievances.