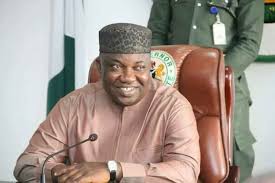 Executive Chairman of Isi-Uzo Local Government Area, Honourable Obiora Obeagu has once again applauded the visionary leadership of Chief Dr Ifeanyi Ugwuanyi which according to him has transformed the rural communities in Enugu State.

Honourable Obeagu gave the commendation at the council Headquarters, lkem during the swearing-in-ceremony of Secretaries and members of the Isi Uzo Development Centres.

The council boss stressed that Governor Ugwuanyi’s developmental strides in communities within Isi Uzo cut across various aspects of social amenities which include education, health and roads among others.

He specifically identified the state government’s intervention in education to include the rebuilding of 55 schools across the communities and the provision of modern learning materials to improve the standard of public schools within the Area Council.

In the area of health, Honourable Obeagu acknowledged the establishment of care centres in several communities and the construction of a brand new cottage hospital with furnishing in Eha-Amufu by the state government to ensure adequate health care delivery for the rural dwellers .

In his words, “Isi-Uzo remains a big beneficiary of Governor Ugwuanyi’s intervention projects. Our governor has constructed bridges, roads, health care facilities including the brand new cottage hospital at Eha-Amufu. He has built over 55 schools across our communities. He also, constructed 8.8km federal road he in Eha-Amufu which has ended our over 35 years of suffering and all these require that we reciprocate srate government’s gestures through absolute loyalty to the administration of Governor Ugwuanyi.”.

He also disclosed that about 438 indigenes of Isi Uzo were employed by the state government under the regime of Governor Ugwuanyi adding that such remained an unprecedented gesture since the birth of democratic governance in the state.

He enjoined the newly sworn-in Secretaries and Members of the Development Centres to show more loyalty and dedication to the People’s Democratic Party, (PDP) and the government of Governor Ugwuanyi adding they were chosen based on merit which required that they work with more commitment to the realisation of the party’s vision of transforming rural communities.

Honourable Obeagu further urged them to redouble their commitment to PDP and the current government not only to ensure total victory for the party in 2023 general election but to also ensure that the purpose of creating the development centres which was to bring governance closer to the people was realised.