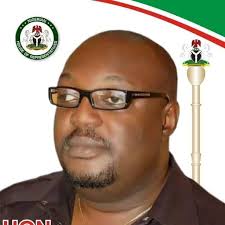 The lawmaker representing Nkanu East/West Federal Constituency of Enugu State in the House of Representatives, Honourable Nnolim Nnaji has raised alarm over the spate of kidnapping and general insecurity in his Constituency.

He stated that the situation has grounded businesses in the area adding that even farming activities have also been affected as his constituents could no longer move freely to carry out their routine activities.

Honourable Nnaji called for urgent intervention from the Federal Government and the Heads of Security Agencies to arrest the ugly development from further escalation.

He specifically singled Agbani community as the worst hit by the marauders stating that, ” the danger is that Agbani houses the campuses of the Nigerian Law School and the Enugu State University of Technology, (ESUT) plus the Airforce School”.

The lawmaker who chairs the Aviation Committee in the House of Representatives observed that, ” in the last one week an average of two persons are abducted daily and just yesterday, two Law School students were kidnapped. My fear is that the increasing insecurity in the community might likely lead to the closure of the institutions domiciled in Agbani if the ugly trend persists”.

The kidnapping according to him has continued unchallenged by the security agencies adding, “the lack of responses from the police and any other security agencies have further emboldened the hoodlums and made them more daring “

Honourable Nnaji however called for immediate deployment of combined team of military and police forces to his Constituency to complement what the Governor of Enugu state is doing to restore normalcy and to also avoid imminent collapse of law and order.