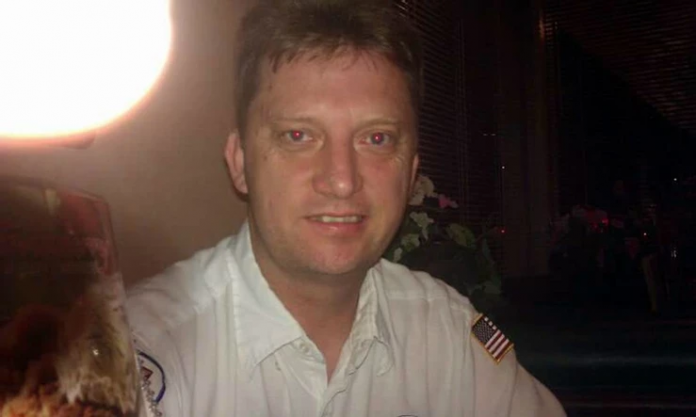 Michael White, a U.S. Navy veteran who was imprisoned in Iran since 2018, was released on Thursday and heading back to the United States, the Iranian foreign ministry and his family said in a statement.

“For the past 683 days my son, Michael, has been held hostage in Iran by the IRGC (Iranian Revolutionary Guard Corps) and I have been living a nightmare,” said Joanne White, mother of Michael White. “I am blessed to announce that the nightmare is over, and my son is safely on his way home.”

White’s mother expressed gratitude to the Trump administration, the State Department, the Swiss government that had relayed messages back and forth between Tehran and Washington, and to former New Mexico Gov. Bill Richardson for working to secure her son’s release.

“I am to happy announce that Navy Veteran, Michael White, who has been detained by Iran for 683 days, is on a Swiss plane that just left Iranian Airspace. We expect him to be home with his family in America very soon,” Trump wrote. “I will never stop working to secure the release of all Americans held hostage overseas! Thank you Switzerland for your great assistance.”

The U.S. special envoy for Iran, Brian Hook, will be greeting White in Zurich and will accompany him back to the United States on an American plane, according to two U.S. officials.

Hopes for White’s release were raised this week when the U.S. deported Iranian scientist Sirius Asgari after acquitting him of federal charges of trading secrets related to his research.

Despite the auspicious timing, both U.S. and Iranian officials denied Asgari’s release was part of any prisoner swap.

White, who was in fragile health and had been undergoing treatment for cancer before his detention in July 2018, was granted medical furlough in March due to the coronavirus outbreak.

He had been arrested after visiting a girlfriend in Iran whom he had met online. White was sentenced to 13 years in prison after he was convicted of insulting the country’s top leader and displaying a private photo publicly.

“This should have and could have been done earlier, but I am glad and relieved that Mike is on his way home to get treated and rejoin Joanne and his family,” said Bill Richardson, the former New Mexico governor and U.N. ambassador, who had worked on behalf of the family to get White released.

“COVID-19 presents countries around the world, including our own, with an unprecedented challenge. The health and wellbeing of prisoners are the responsibility of the country holding them,” Richardson said in a statement.

White’s pre-existing medical conditions “made him extremely vulnerable” to COVID-19 to the disease, Richardson said. After he was given a medical furlough, White was moved from a prison and transferred to a hotel, though he remained in Iranian custody, according to Richardson.