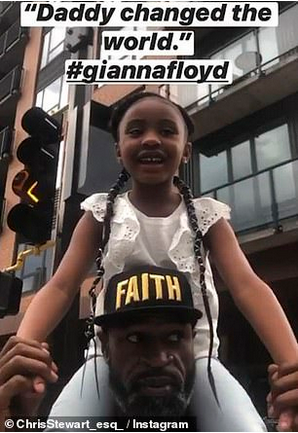 Kanye West has offered to fully pay for the college tuition fees of Gianna Floyd, the daughter of George Floyd, who was killed last Monday at the hands of four Minneapolis Police officers.

Gianna is six years old and was recently seen on her uncle’s shoulders saying: ‘Daddy changed the world.’ Her mother said she told Gianna the father died because he couldn’t breathe.

West has set up a 529 college savings fund as part of $2million worth of donations to African American people who have recently been killed by police and white people.

West is giving ‘to the families and legal teams’ fighting for Ahmaud Arbery and Breonna Taylor, TMZ reported.

Arbery was killed by white men who hunted him down and shot him while he was out jogging in Georgia. They said he fit the description of a burglary suspect.

One man who filmed the killing drove behind Arbery while Greg McMichael, 64, and his son Travis McMichael, 34 waited ahead in their truck before shooting him. Prosecutors claim Greg yelled: ‘F**king n****r’ after the execution.

Taylor was killed when police broke into her Louisville, Kentucky apartment and sprayed bullets around the place while she sleeping. They said they were looking for a male drug dealer, even though that man was already in custody.