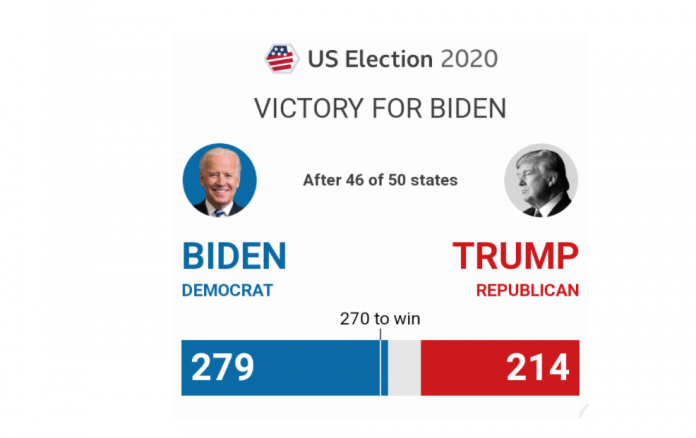 Joe Biden has said he wants to restore the soul of the United States, vowing “not to divide but unify” the country, in his first speech as president-elect.

“This is the time to heal in America,” he told a crowd in Wilmington, Delaware.

Mr Trump has yet to concede and has not spoken publicly since his defeat was announced while he was playing golf.

The result makes Mr Trump the first one-term president since the 1990s.

I pledge to be a president who seeks not to divide, but to unify; who doesn’t see red states and blue states, only sees the United States,” Mr Biden said in his speech on Saturday night.

“I sought this office to restore the soul of America, to rebuild the backbone of this nation, the middle class and to make America respected around the world again, and to unite us here at home.”

He also reached out to those who voted against him in the election, which saw a record turnout.

“It’s time to put away the harsh rhetoric, lower the temperature, see each other again, listen to each other again,” Mr Biden said. “And to make progress, we have to stop treating our opponents as enemies.”

The president-elect announced that he would form his coronavirus response committee to ensure it is ready to implement decisions from his inauguration day in January.

More than 237,000 Americans have died since the pandemic began – more than any other country in the world – and Joe Biden’s campaign focused heavily on curbing the spread of the virus.

Mr Biden was introduced by his running mate, Kamala Harris, who has made history as the first female, first black and first Asian-American US vice-president-elect.

When our very democracy was on the ballot in this election, the very soul of America at stake and with the whole world watching, you ushered in a new day for America,” she said.

“You chose hope and unity, decency, science and yes, truth – you chose Joe Biden as the next president of the United States.”

“And the road ahead will not be easy but America is ready, and so are Joe and I.”

She also noted the historic moment that the election result marked: “While I may be the first woman in this office, I will not be the last.”

Enthusiastic crowds gathered outside of the campaign’s headquarters ahead of the speeches.