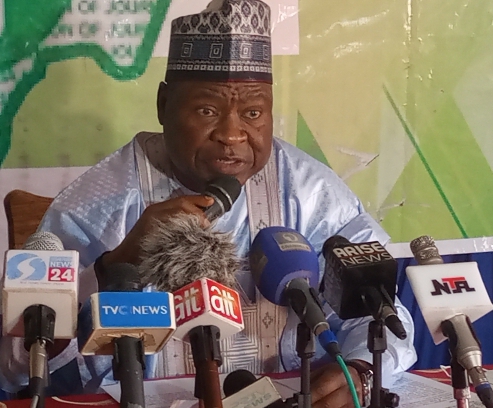 Abuja –  Director General Industrial Training Fund (ITF), Sir Joseph Ari, has said he has no political future ambition to contest for any political office in the future.

Dr. Ari also called the attention of security operatives to what he called attempts by opposition party and disgruntled elements to smear his image.

Peionews recalls that there have been insinuation and rumors that Sir Joseph Ari, was warming up to run for elective office in plateau state.

The DG in a statement he read while briefing newsmen over the weekend, described the insinuation as not only ” false ” but as ” part of the series of attempts to distract him from carrying out his mandate as the Director General of ITF.

The statement reads in full:

PROTOCOL
I am very delighted to meet with you today, in order to shed light on matters of great concern for me as an individual and in my capacity as the Director-General/ Chief Executive of the Industrial Training Fund (ITF).
Ladies and Gentlemen, since my appointment as the Director-General/ Chief Executive of the Industrial Training Fund (ITF), I have invested all energies in ensuring that the institution achieves the vision and aspirations of its founding fathers. Therefore, under my watch, the Industrial Training Fund has hit lofty heights, fulfilling its onerous mandate of developing the Nation’s human resource, while also partnering the Federal Government to actualize the objectives of the President Buhari Administration especially with regard to poverty reduction, job and wealth creation.
Under my leadership, the ITF has been at the forefront of instilling in Nigerians the need for the country, like other developed nations of the world, to embrace Technical and Vocational Education and Training (TVET) as a real alternative to paper qualification and white-collar jobs, and the most sustainable solution to the seemingly intractable problem of unemployment and poverty. In doing this, our efforts have received plaudits and commendations of governmental and non-governmental organisations.
Gentlemen of the press, although Warren Buffett may not have thought of my current experiences when he said “Greatness inspires envy; envy engenders spite; spite spawns lies,” his expression aptly captures what has transpired in the last few days. As journalists, some of you may perhaps, be aware of the activities of unscrupulous elements that are bent on pulling me down. What has come to my attention is that in their desperate attempts, they have printed campaign posters suggesting that I am aspiring for an elective position, and also canvassing support for the aspirations of some candidates that are vying for elective positions in our great party, the All Progressive Congress (APC) in upcoming APC National Convention. I have also been reliably informed that these disgruntled elements plot to flood the convention venue with these posters in order to breed mistrust and disharmony and thereby generate rancor for their own selfish purposes as I have never contemplated and not contemplating on vying for any elective position in the nearest future, as I am presently busy and fully engaged with the onerous responsibility of deploying the mandate of the ITF to equip Nigerians with skills for employability and entrepreneurship.
To this end, the public is therefore, advised to disregard any campaign poster to the effect that I, Sir Joseph N. Ari, is running for any elective positon, or in support of the ambition of any candidate during the upcoming APC convention as it is false, unfounded and not deserving of any attention. I have, therefore, reported the matter to the security agencies for their further necessary action.
In conclusion, my advice to the mischief-makers is for them to heed the words of Rev. Fr. Evaristus Abu in his homily of Friday, 18th March, 2022: “If you do not celebrate the gifts of others; no one will celebrate yours. If you try to pull people down, you will forever remain down. None of us is cheated by God. No human being is without special gifts and abilities. God has planted a vineyard in you and He expects to see your fruits. Watch out when you begin to criticize others continuously, you may simply be playing out your envy.”
On a final note, I have taken the pains to bring what has transpired to the public glare, as it will be difficult to convince anyone after the deed has been done.
I, appreciate you all for honouring our invitation in spite of the short notice and for your unflinching support and collaboration always.
Thank you for listening and God bless us all