Home Politics I have what it takes to succeed Buhari as President – Lawan...
Facebook
Twitter
WhatsApp
Linkedin
Email
Telegram 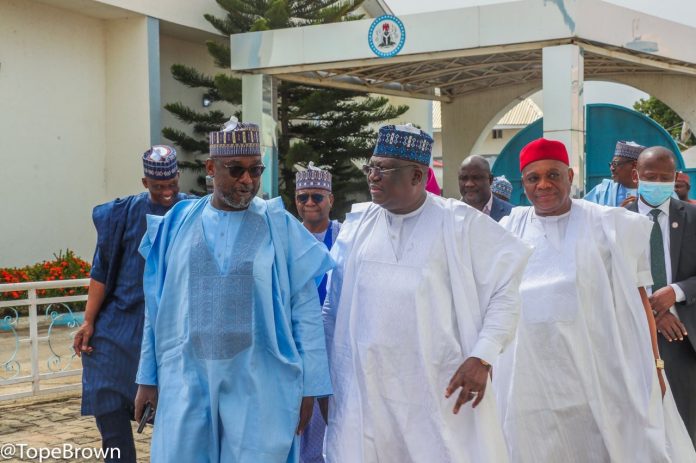 Abuja – The President of the Senate, Ahmad Lawan said on Monday that he has all it takes to succeed President Muhammadu Buhari whose tenure comes to an end in May 2023.

“I am equipped. I have experience enough, I have what it takes to be Nigerian President after President Muhammadu Buhari leaves office,” Lawan said at Minna in Niger state while addresing the All Progressives Congress(APC) delegates from the state.

Lawan and his campaign team met the State Governor, Abubakar Sani Bello, the delegates to the upcoming APC Presidential primaries and later paid homage to the Emir of Minna, Dr Umar Farouq Bahago.

According to the statement released by Ahmad Lawan Presidential Campaign Organisation signed by Ola Awoniyi and made available to Peionews, Lawan solicited the votes of the delegates against the background of what he has to offer, his vast experience in governance and the stability that he brought to the parliament.

“For the last three years, I have been the Senate President. I have been able to work very well with all my colleagues regardless of their political parties.

“It is that type of stability, that type of peace, that kind of unity that I want to bring into the Villa by the Grace of God next year.

“I am running for the office of the President of the Federal Republic of Nigeria because of what I believe in. For me, mandate is service.

“Having served in the Legislature and having been working with Mr President as the Senate President, I therefore get close to governance, a very good participant in governance at the national level.

“I am equipped. I have experience enough, I have what it takes to be Nigerian President after President Muhammadu Buhari leaves office.

“At my age, and I’m a very young man. I’m only 63 years, in between the old and the new. I believe that I can carry the young. And the young is the centre piece of my policy.

“But first let me tell you what I want to do for us. Security. We all know that Niger state has been at the receiving end of insecurity and I know how hard our friend, our Governor has been working to secure the lives of the people of this state.

“The Federal government under the leadership of President Muhammadu Buhari has been doing a lot. We have conquered the Boko Haram in the north east. But we still have challenges in the northwest, in this part of north central.

“It is my intention to continue to work with our President to fight insecurity in every part of Nigeria until he finishes his tenure by the Grace of God on the 29th May, 2023.

“It is my intention to start to serve as the President of the Federal Republic of Nigeria, to build on the succeses that our President would achieve when he will leave office.

“I believe that we need to consider the architecture of our security system. I believe in citizens participation in security. You and I, report what you see to the relevant authourities.They say if you see something, say something. If you see bandits, inform the appropriate authourities.

“I also want to build on the successes of President Muhammadu Buhari on the economy of Nigeria. I believe that it is still not yet what we want but we are better than many countries.

“Finally, Niger state is an Agricultural state. I want a situation where at least every geo-political zone will have one crop that will be nurtured for production, for processing and for marketing.

“That is to say that it is not enough for us in Niger state to produce yam only. We should produce the yam, process the yam and sell with a higher value.I believe that this is one way to deal with the youth unemployment,” Lawan said.

In his response, Governor Sani Bello thanked the Senate President and his team for the visit.

“I think he has laid out his plans for Niger state for you delegates to consider. So that you give him your mandate to represent our party at the next presidential election.

“I don’t need to say much. You all heard when he started. He has been in the National Assembly since 1999. I don’t think anyone has broken that record yet in Nigeria,” Governor Bello said.